One Reason I Haven't Posted Much This Year 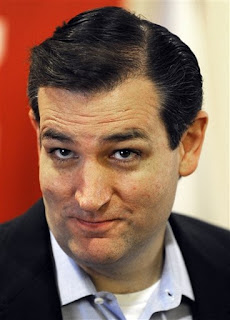 Yep. Just the thought of Senator Ted Cruz(R-TX)makes me feel like comedian Lewis Black just before his head explodes. America, as a Texan please accept my apologies for living in the same state as George Bush, Rick Perry, Karl Rove and now this colossal prick. Hard to believe Texas could produce a new politician who's even more dangerous and obnoxious as the afore mentioned list, but we have done it. He's Sen. Joseph McCarthy meets-Roscoe Sweeney-meets an anteater, only more paranoid, arrogant and shadier than all three. He's dangerous, folks. I hear his colleagues in the Senate are horrified at his bombastic approach and his scene stealing demands for attention. As a freshman senator, he should shut up and learn the ropes, but no... If you're like me and like to keep your eye on emerging political scumbags, I highly recommend Cruz.
Posted by Karen Zipdrive at 3:47 PM

He's not a Texan and he doesn't speak one word of Spanish. How the hell did this carpetbagger weasel his way in??

"I hear his colleagues in the Senate are horrified at his bombastic approach..." Well, hellsbells, that got my attention. If THEY are appalled, then he must be a piece of work for sure. I will be paying attention.

Loved it
valentine sms for girlfriend

Dude from Another World said...