Why Santorum Failed to Pull It Off, or Out as the Case May Be 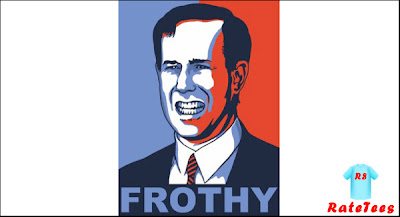 The moral of the story: never upset gay men who know how to achieve maximum Google exposure.
I know it's been used to death, but like a good Village People song, some words never get tiring to hear.

Email ThisBlogThis!Share to TwitterShare to FacebookShare to Pinterest
Labels: Frothy
Why They Lost 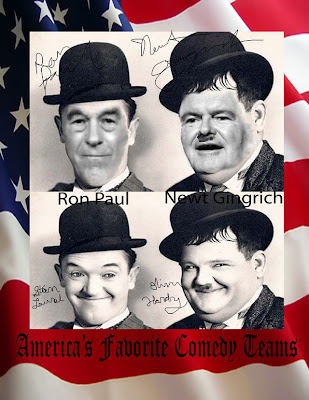 Email ThisBlogThis!Share to TwitterShare to FacebookShare to Pinterest
Labels: Ron Paul and Newt Gingrich
The Secret Diary of Mitt Romney Golly gee, who'd a thunk that Catholic guy Dick Santorium in the sweater vests would have gotten as close as he did?
And Newt, with his three wives--and I don't mean simultaneous marriages, either, I mean wear one out and get another! Such a sinner!
People may snigger at the LDS way, making fun of our magic undergarments and such, but by golly gee whillikers, I guess we showed 'em in Arizona and Michigan.
And by golly, to heck with the naysayers, what's wrong with Mrs. Romney and I having a little money saved up?
Some say I should be ashamed that I worked hard for Bain Capital and received only a few thousand dollars an hour for my expertise. Some even think it wrong that I spread my money into Swiss and Cayman bank accounts. Why, doesn't everyone do that?
I am raring to go against Hussein Obama, you can be darn tootin' of that.
I think all good Americans know his Socialist Kenyan roots mean only one thing-Muslim.
But of course I don't plan to negatively campaign against him. I'm sure folks just take a look at the missus and me and see Ward and June Cleaver, and they look at the Obamas and see H. Rap Brown and his wife Angela Davis.
Is that the America we grew up in? For gosh sakes, no.
Look, the Good Lord will tell you I'm a humble man of humble origins.
I had to work hard for every cent my father bequeathed me, and I'm not ashamed to roll up my sleeves and watch that money grow, untaxed in Switzerland and the Caymans like the Good Lord intended.
Yesirree, I think once the wonderful American people take a look at the two candidates, things will be as clear as black and white.
In fact, once the LDS leader spoke to God, he realized that yes, even those people should be allowed in most LDS temples. Sure, maybe not The Big One in Salt Lake City, but these things take time.
Let's give the American voters credit.
They gave the negro a fair chance and he's just not the right kind of president.
You and I know it, diary, we just have to keep that on the QT until I am sworn in.
I know just what to do with the economy. You bet I do.
Posted by Karen Zipdrive at 4:29 PM 2 comments:

Email ThisBlogThis!Share to TwitterShare to FacebookShare to Pinterest
Labels: The Secret Diary of Mitt Romney

Like with Amy Winehouse, I feel shocked but not not surprised that Whitney Houston died today at age 48.
I can't imagine being born into a family of singing legends, then becoming a talent who outshined them all, only to squander it all in a haze of crack smoke.
This performance occurred only two days, ago and you can hear that the instrument she was given was irreparably damaged.
I think the coroner will probably say she died from a drug overdose.
As morbid as it might seem, if she did die from drugs I hope it was heroin and not crack cocaine.
At least heroin has an historical context, with many black female divas succumbing to that drug before she did.
Crack is so whoreish and dirty and desperate.
Even Amy Winehouse never went near the crack pipe, as far as I can tell.
I'm sad to see that Whitney Houston's vocal abilities left before she did. It will forever mar my memories of her once-legendary talent.
RIP.
Posted by Karen Zipdrive at 11:26 PM 4 comments: 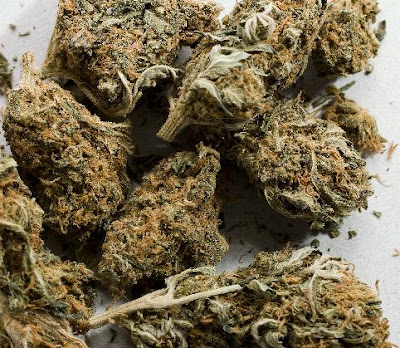 According to a 40-year study whose findings were recently released by Zipdrive Research Associates, today's marijuana is approximately 60 percent stronger than it was in the 1960s.
Also, it was found that today's names for marijuana have become more descriptive than decades earlier, when brand names like Acapulco Gold and Sin Semilla were about the extent of it.
Now there are brands such as Sweet Tooth, Bungie Jump, White Widow, Catatonic, Bungler, Hungry Horny Hippo (H3), Fat Lip, Who Dat, WTF/OMG, Konk-Out, Foggy Bottom, Barry White, Chillax, Hard-to-Text, Sleepyhead, GoofyMax, Pizzarun, Bong-O, Big Butt, Biscuits, The Zone, Woodpecker, Pointyhead, DingDong, and many others.
Rolling paper technology also has diversified over the years, with a special emphasis on healthier lifestyles. While older brands such as ZigZag and Ritla are still on the market, now paper-making ingredients might include rice paper, tofu, seaweed, spirulina, wheat, dryer lint, cellulose and papier mache. New sizes also have been introduced, including an 8.5 by 11 inch gargantuan called, "Happy Hour."
Zipdrive Research Associates have estimated that the tetrahydrocannibinol (THC) levels of Sweet Tooth, for example, are said to be
...wait, what?
Posted by Karen Zipdrive at 7:08 PM 6 comments:

News You Can Use 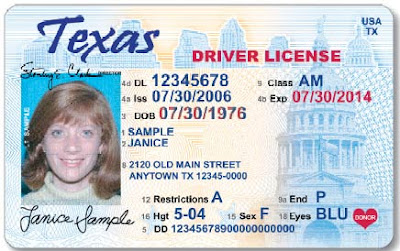 If you're ever in a bar making sucker bets, here's one you can win for sure.
Though we all call them a driver's license, in reality it's called a "driver license."
So go out and make that bet, and make it a big one.
You're welcome.
Posted by Karen Zipdrive at 10:16 AM 2 comments:

Email ThisBlogThis!Share to TwitterShare to FacebookShare to Pinterest
Labels: What's that thing called? 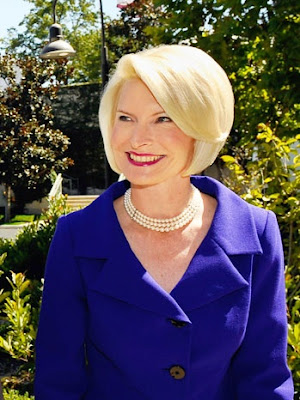 We get it.
They dress up this weirdo like a drag queen, trowel on the make-up, hammer on the platinum hair helmet and then tell her to flash the most demonic face she can make.
But, damn it, people all over the world are seeing these same creepy photos and they must think the whole nation has gone bat shit crazy.
Isn't there anyone in charge at Camp Newt who can pull her aside and tell her to knock off the lunatic hijinx?
It's embarrassing.
Posted by Karen Zipdrive at 9:03 AM 5 comments:

Email ThisBlogThis!Share to TwitterShare to FacebookShare to Pinterest
Labels: Crazy Callista
A Few Things to Ponder 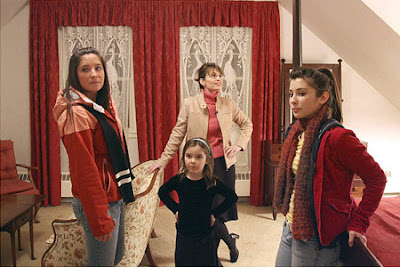 Do you think the Palin daughters were embarrassed once their mother started speaking to the media extemporaneously and divulged a huge chasm of ignorance about history, geography, economics and so on?
Or do you think the daughters are even stupider than Sarah Palin and didn't realize they can't actually see Russia from their back porch?
Do you think any of the daughters know anything whatsoever about Paul Revere?
I think that Todd Palin is probably dumb, and I know Sarah Palin is gypsy/grifter smart but not the least bit intellectual.
I think when they started breeding Trip and Trap and Truck and Willblo and Peeper and Brisket, their weak genetics mashed together to form super sub-par progeny.

I just can't believe how mediocre politicians have gotten. To think this simpleton, Narcissistic woman still has the power to act coy with the media tells us how low our standards have slipped.
And to think that the GOP's presidential hopefuls are Ron Gabby Hayes Paul, Frothy Santorum, Mitt$ Romney and that horrible bastard Newt Retread Gingrich.

I'm not saying Obama has been the best president in American history; I'm just saying when compared to the batch of fetid slop GOP has served up, Obama may as well be named Abraham Roosevelt.
Posted by Karen Zipdrive at 8:07 AM 6 comments:

Email ThisBlogThis!Share to TwitterShare to FacebookShare to Pinterest
Labels: Sarah and the Other Stupid Palins

Swiss Bank Accounts and Some Dough in the Caymans. A Fine American. This GOP primary is making me miss McCain and Palin.
They've got two crooks, a geezerly quack and Frothy Santorum--what a winning mix.
Somewhere in Kenya, an Obama cousin has been using Muslim juju to conjure up this batch of goons in the GOP mix.
Those little bitches Newt and Mitts have shred each other so much by now, Obama's new campaign slogan is, "At least I'm not them."
I watched three minutes of the last debate.
The Republican I was watching it with had to change channels after three minutes because she was getting nauseous.
I'd rather watch old episodes of The Jersey Shore. At least they're comparatively likable and authentic...and they don't strap their dogs to the tops of their cars-- I mean, if any of them had dogs or cars.
I haven't blogged much about the GOP slate because it's way too easy to lampoon them. They are so ridiculous, making fun of them would seem redundant.
If you had to vote for one of them, who would it be?
Posted by Karen Zipdrive at 4:41 AM 4 comments:

Email ThisBlogThis!Share to TwitterShare to FacebookShare to Pinterest
Labels: Mitts
I'd Have the Same Facial Expression 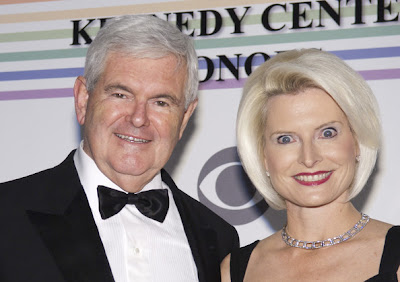 My God, what is wrong with Calypso's face?
Doesn't anyone on team Newton have the courage to tell her to cut that out?
Can't they see she's pretending to be waxen and crazy-eyed just to mess up Newt's chances of becoming the next GOP president?
I mean, the man is so charismatic, especially for a rapid cycling undiagnosed & untreated bi-polar!
Just listening to his quick fire stream of ideas and those peppery arrows aimed toward Mitt Romney and I think, "RISING STAR!"
I'd really hate to see wife #3 louse it up for him.
I wish Nancy Reagan, old Barbara and Laura Bush would call her and give her some first lady beauty tips.
Posted by Karen Zipdrive at 4:25 AM 5 comments: