Why TomKat Are Divorcing 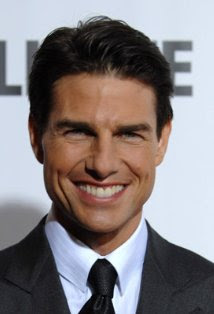 I make no apologies for being intrigued by reading the lurid details regarding the upcoming Katie Holmes & Tom Cruise divorce. The most common speculation for Katie wanting a divorce are: 1. He's gay. 2. His church of Scientology is a creepy cult. 3. He's divorced all his wives once they reach the age of 33. 4. Katie didn't want the church to snatch up Suri and take her to planet Nubulon for programming and induction. 5. He's very controlling. 6. He works too much. 7. He and John Travolta were caught having sex in the men's room of the Scientologist's Celebrity Centre in Los Angeles. 8. He's only 5'2" and all of his body parts are in proportion, including his 2.5 inch penis. 9. He knocked up Adele. Oh sure, any of these reasons might be true, but I am here to tell you why all of Cruise's marriages have gone belly up. Examine the photo closely. Look at that smile. His front tooth is in the middle of his face, directly under his nose! Tell me who could stand looking at that oddity for more than a few years, max? I'll bet when he talked, Katie Holmes would get so caught up staring at that freaky centered tooth she never heard a word he said. It must be kind of like talking to someone who has a bright green booger dangling from one of his nostrils, or someone with a pinto bean skin stuck to his front tooth. Who can focus on anything with that shit going on? Yep. I'll bet Tom gave Katie one of his huge movie star smiles once too often, and she said, "Look, Shorty, you have an abnormal tooth in the middle of your face and I can't do this anymore. You being a gay, workaholic, Scientologist, dwarf didn't bother me, but that goddamn tooth is a nightmare." You heard it here first. You're welcome.
Posted by Karen Zipdrive at 7:51 AM

Sounds like a good theory except that Katie is 3' taller than tom and probably never saw his teeth. Unless she picked him up to put him in his high chair throne.

I believe the fear for Suri's future is the big factor.

In all seriousness, I think they made a 5-year contract that promised her more fame and a huge chunk of money in exchange for her popping out a kid and keeping his big, gay secret.
What's with these male Scientologists and their secret gay lives? Who cares?
Anyway, I think time was up and Katie is taking the money and the kid Cruise just needed as a prop and heading for the hills to get away from that creepy little gay shrimp.
While nobody can be sure of the exact details, I think we can all agree that something is definitely fishy about this whole situation.
The guy's got a screw loose and she's just a fame whore like the rest of Hollywood.

I never noticed the tooth thing!

Katie and her divorce lawyer father hatched up the perfect divorce sting. Old queenie tom and his weird ass cult underestimated Katie and she ended up burning all of them in the end. She got the kid, the $$, freedom from his cult, and he had to agree to keep his shit hooks off of Katie and Suri. I LOVE it!

I knew a good Catholic girl could outsmart, outwit, outlast and win out over a bunch of closeted aliens.