Honest, God, I've Been Trying to Clean Up My Language 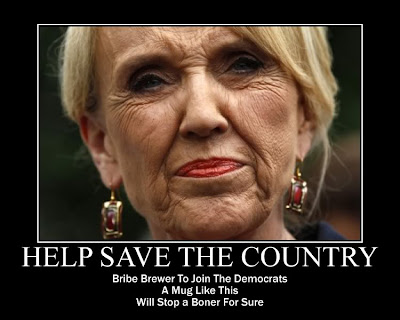 Recently I've been trying not to curse so much. It had gotten to the point where I used the word fuck (or variations of it) in almost every other sentence I uttered. Now comes Arizona's Governor Jan Brewer and her new law that prohibits Mexican Nationals from obtaining drivers' licenses in Arizona, even if they have legitimate permits that allow them to be employed in America. She's such a petty skank whore woman, I just want tobeat her to death with a fucking baseball bat ask her why she's so fucking adamant,vindictive and intolerant toward Mexican immigrants. Did one of them ass rape her as a child, or what? Sure, she's a fucking racist bitch Republican, but must she be such a bitch carry things to such motherfucking obvious extremes? I never cared for Arizona because it's hotter than Hell and home to so many honky white bastards and bitches because of its long standing idiotic racist conservative extremism, but with this hateful old seahag Governor Brewer at the helm, it's actually gotten worse. Why, even knocked up whore bitch Bristol Palin chose to move to Arizona because the dump is as horrible as she is of its right-wing political climate. Simply put, Jan Brewer is a dried up piece of lizard shit Ms. Brewer is making a negative impact on an already fucked up the state she represents. I hope she drops dead of a heat stroke I hope she evolves into a likable person one day which will never happen because she is the spawn of Satan. and becomes a more compassionate and a less loathesome bitch person.
Posted by Karen Zipdrive at 9:19 PM

In her defense...look at that lemon and egg sucking face. Would you be a reasonable and enlightened person if you had to look at that every morning? I think not. The only worse case scenario I can think of is her husband rolling over and waking up to that in the mornings. I can't even imagine what happened to the poor bastard the night before. Probably has to use a strap-on. I am sure he says to himself several times a day, FUCK...FUCK...FUCK...pass the Peyote...I need it bad!

Peyote would only make her more hideous. I'd steer clear of any hallucinogenics if I had to wake up to that puss.