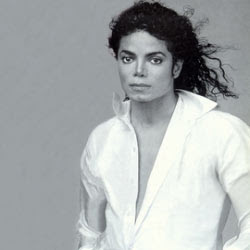 Say what you will about Michael Jackson the man, but as a performer he was peerless.
Because I was curious about what the concert he didn't live to perform would have been like, I went to see the docu-concert movie, "This Is It" tonight.
Now, I'm not sure I agree with Oprah and The View's Sherry Shepherd that the movie should win an Oscar, but it was a very compelling thing to see.
From his polite but maniacal attention to detail, to his imaginative dancing and still powerful vocals, it was nice to see him on stage and remember how amazing he used to be.
The songs were all very familiar--none of that HIStory crap.
If you know the words to at least two of his songs, then the movie will make you happy.
My companion and I both tried to tell if he looked sick or drugged or dazed during the movie, and the answer was yes and no. If I tried to sing and dance every day for hours and hours of rehearsals, I'm pretty sure I'd look like hell about 15 minutes into it.
But for a 50-year-old, his body was toned and lithe, and his voice was as pretty as it ever was.
Nothing in the movie made me cry, but toward the end when I recalled him saying he wanted to do the concert so his kids could see him perform for the first time, I misted up a little.
They loved him as their dad, but seeing him on stage will surely blow their little minds. For that, I'm happy they filmed so many of the rehearsals.
I think the concert would have been stupendous.
Go see it. Tell us what you thought of it.
Posted by Karen Zipdrive at 10:42 PM

Perv or not, MJ was created to be an entertainment machine and that's what he was up to the last minute.

I didn't think anyone could steal the show from MJ, the "Ham in the Mirror" but his lead guitarist, 24 yr old Aussie blonde bombshell Orianthi Panagaris did just that.

Great movie if you suspend all thoughts of his personal life and just see it for the total entertainment value.

He was a drug user and child molester.m He belonged in Jail and nothing can change that. this movie should have never been released. I hope that he is burning in Hell

He was definitely a drug abuser, but his drugs came from physicians, not street thugs, so there is some blame to go around.
As for his child molestation charges, he was cleared. I wasn't there to see him diddling any kids, but you seem to have witnessed it. So why didn't YOU call the cops?

I saw the movie last night, he was AWESOME !!!! he was a genius performer !