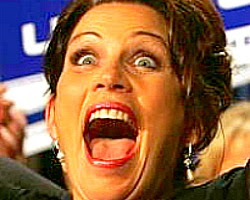 Yeppers, I won the straw pole in Iowa, which means I am a seriously serious candidate for the Ovel Office!! Marcus was so proud, he actually made me a precious "straw" hat with American flags all over it! He's so talented with arts and crafts n' such. He calls it my "straw pole hat." LOL he's such a hoot!
Oh, and I heard thru the grapevine that Sarah Palin hates my guts. Jealous much?
LOL!
I think voters prefer midwest casserole to moose stew any old day!
And thank the Lord Jesus that none of my daughters are harlots like those Palin girls. Thanks to myself and Marcus, my girls have always been poised, well groomed and ladylike because he sets a great example for them and me too.
Also too, I think Sarah Palin is a Pentacostal and that style of "Christianess" involves snake handling, speaking in tongues and basically going crazy in church.
If she throws her hat in the ring, I plan to mention all that Pentacostal crazyness at every opportunity.
Campaigning has been rough, I gotta be honest.
The liberal media and pundints keep asking me ridiculous questions about stuff you'd have to be President to even know about!! But I hold my own, and if all else fails I dazzle them with what Marcus calls my "million dollar smile."
I know it'd be totally cool to be President, but I think it's so darn cute when Marcus keeps talking about all the fantastic outfits he plans to wear to all those fancy inagural balls.
He's already picked out some beautiful Pierre Cardin dancing shoes--they are black patend leather with slightly elevated heels. He has such great taste in clothes and shoes and such! He's even been picking out my campaign outfits and shoes to wear on the campaign trial. Such a helpful husband is rare!
My GOP competition is pretty darned stiff. Mitt Romney looks presidential, Ron Paul is an actual doctor, so he's super smart, and now Rick Perry is in the race. I'm not too crazy about Rick but Marcus thinks he looks like a movie star, so he'll be hard to beat.
Luckily for me, the tea party loves me and so do the Christians. America so needs a good Christian President, instead of a certain Muslim from Kenya who's name I won't mention. No way will that certain person be re-elected cuz he's...well lets just say the "black experiment" didn't pan out to well.
I havent really drawn out my Presidential platform yet, but I have some wonderful educational suprises for America if I get elected.
Prayer will be back in classrooms, science teachers will not mention the word "evolution" except to joke about it, spanking or paddling will come back so children will learn there place in society and be more politer, girls will wear skirts and boys will wear ties and get proper haircuts. No more hippy nonsense!!
In my humble Christian opinion, the only male who wore his hair long was Jesus Christ Our Savior, and, it should of stopped with him.
I think Marcus will be a fantastic First Man if I get elected. He's so fabulous with people and such a sweet, well-mannered gentleman. Just between you and me, diary, he's so considerate he understands the stress of the campaign so he never bothers me for s-e-x anymore.
Besides, theres alot more to marriage than just s-e-x. We agree that our spiritual bond is our secret weapon for a happy marriage--not lust or passion or any of that dirty stuff that messes up so many couples. Marcus has never even looked at another woman with lust in his heart--he told me so himself.
And beleive me, alot of women have flirted with him cuz he's so handsome and charming, but he tells me I'm the only woman he might ever want.
So many politician men are so nasty with all the s-e-x scandles--horrible deeds with harlots, silly young women and even homo males!! It's an abomination and it will cease when I become President!!
What America needs is Good Christian Values, prayer, more churches and federal support for Christian churches and schools. The rest of them, the jews and muslims and voodoo witches, etc need to quiet down and practice there Pagan devil worship or whatever they do in private. It's also too an abomination.
And the worst of the worst is all this gay nonsense. What nerve they have demanding marriage and domestic partner benefits and having children!! Not on my watch!
Well, Marcus is calling me from downstairs so I have to close for now. He loves it when we watch Dancing With the Stars together and it's about to come on the TV.
Chow for now, diary! Tootles!
Posted by Karen Zipdrive at 6:02 AM

And to think, God sent her our way just in the nick of time to twart the Soviet Russia re-build up. Hallalujah (or whatever that expression is)!

That God fella has an amazing sense of humor.

I wonder if Marcus ever met Rick somewhere in their pasts?