The Secret Diary Of Rick Perry
Discovered in a dark closet by Rupert Murdoch and Associates, now the world can take a glimpse into the fascinating mind of Governor Rick Perry (R-TX) 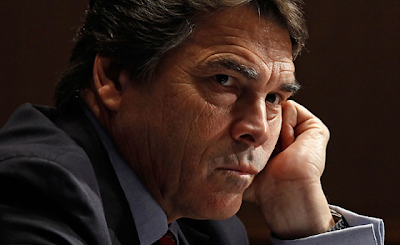 Yeah, boy, I plan to thow my hat in the ring purty goddamn soon and run for the preisdency of the New Nited States.
I just hope that goddamn wife of mine keeps her stinkin dirty slut trap shut about catchin' me an Geoff O'Connor up in the bedroom at the govnor's bedgeroom awile back. Hey it was a honest misteak--I dun hurt mysef joggin and he was just massaging my groin mussel with his mouth because his hands got to tired. Caint a goddamn buddy hep out a nother buddy?
All reddy the goddamn librul media is up in my face about muh grades at A&M: but I say if that fuckin idjut Geiorge W. coud a gotten hiself elected why the goddamn hell caint I? Besides, that cheerleadin takes alot of practice & the boys on the team were countin on me to open wide an yell my goddamn head off!
I all reddy came up with that prayer brekfest idea so all the dumass christains will think I got religion an all; an I think them idjuts purty much bott it.
Besides,, I am a whole hell of a lott prettyer then Bush and the stupid ladys will think I'm as hot as Ronald Raygun and younger too boot.
Plus the Tea Baggers love me becuz I am tough on taxes an such--or whatever they like to here--hell-- I jus read what Karl Rove gives me to read.
Besides I jus loves teabagging HAW HAW you can ax Geoff O'Conner how much I love that shit! HAW HAW HAW
Much as I hate too, I gotta include some ladys in my campane so I'm gonna ask that ugly old sow Greta van Suscrin to be my press secratery. Shes got all them people at Fox News at her buck and call so I figger I can put up with that ole ugly bag of bones just till I get elected; than she'll be dumped like a hunert pound bag of horse crap lickity split.
I know the goddamn librul media will be axing me all about do I support gay marrage and my answer will be hell no. No way am I paying some guy alimoney when I alreddy have that goddamn Anita threatening to deevorse me ever time I mention her spending my goddamn money to much.
Karl Rove said I gotta rememrber a whole lotta goddamn talkin points and stay on track at all times ever!!! Lemme see--no taxes for rich guys only I gotta call em job creaters. Obama ruint the ecomony. Obama was borned over there in Africka. Jesus is my co-pilot. No saying goddamn it or otherwisse say any cusswords. No lookin at guys crotches no madder how hot they are. No innerviews with Anderson Cooper for that same reason. No callin' bad names to women even if they are skank and smell like fish. Lemme see what else. Uhh, no Arab oil depends. No gun controls.
If they ask about me sayin Texas would succeed from the nation I will say that was took out of contex or say I never said It.
Oh yeah Karl says I gotta kiss babys even negro and meskin ones.
I kin all reddy see this is gonna be easy as pie to git her done. Them librul medias think theyre real smart but they aint met Rick Perry yet!!!
Make that Preisdent Rick Perry!!!!!!
Posted by Karen Zipdrive at 4:06 PM

He dun sum good writin in that dairy. A dairy where's the cows are, right? Wize he writin in it?

I LOVE you KZ!!! This is friggin awesome woman!

i knew i could count on you for my gov little ricky goodhair info.

Damn, the man can write! Who'd athunk it.

I think it was very considerate of Rick the Prick to have done so poorly in college. It wouldn't have been any fun at all had he been an A student.
And is it me, or is he aging badly?
He's starting to look like Tommy Lee Jones after a weekend bender.

I'm thinking that's an insult to Tommy Lee Jones. How about Burt Reynolds after his 4th lift?

Jaded, Tommy Lee Jones lives here in San Antonio and he's one of the meanest drunken pricks in town.
Lulu, the more Perry talks the better it'll be. America is already noticing what a moody, hot tempered bastard he is and his campaign is just getting started. I predict that some MSNBC-type journalist will ask him the wrong question and he'll go ballistic.
I can't wait!

The key word in your presentation is the following word: Prick