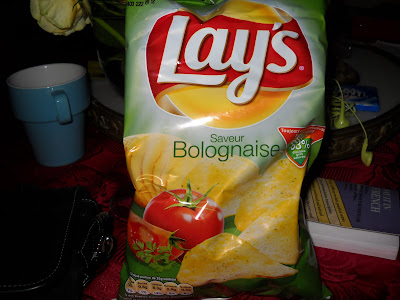 When we spotted this bag of chips in a nearby bodega, we had to try them out.
Bolognaise flavor, really?
Turns out they were pretty good, sort of like BBQ chips without the smoke flavorings.
Which brings me to my point.
Bolognaise is an Italian sauce, not a French sauce.
But in Paris, almost every restaurant offered some kind of pasta dish because pasta is cheap and people like it. Parisian restaurateurs are wising up.
Poor Paris, for centuries they've had one style of cooking. You cook some kind of protein in a pan, deglaze the pan with butter, cream or wine, then pour that sauce over the cooked protein.
But with so many immigrants opening ethnic restaurants to rave reviews, it's no wonder products like Lays Bolognaise chips have invaded. 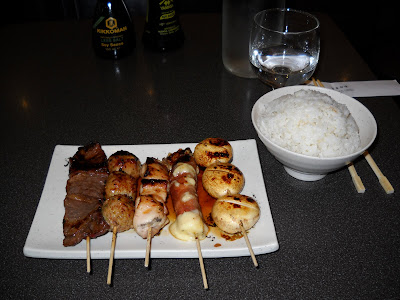 For example, I had this at a Japanese restaurant in the 4th district. Skewers of beef, chicken, chicken meatballs, cheese and mushrooms. Deeelicious, and it wasn't French at all.
Times are changing for culinary France.
Nouvelle French cuisine grills and roasts more proteins, creates sauces from fruits or vegetables instead of just pan scrapings, and they go a lot lighter on the cream and butter.
But they still think salad comes after the appetizer and entree, just before dessert.
Posted by Karen Zipdrive at 7:59 AM

Email ThisBlogThis!Share to TwitterShare to FacebookShare to Pinterest
Labels: French Invaded by Lays

...not necessarily Italian, since France has a Boulogne-sur-Mer (usually referred to as Boulogne)of its own. Perhaps there's a cuisine to go with. We took one of those high-speed ferries over from England, but jumped a train for Paris, so I didn't have a meal there. .

that looks so good (the japanese food, not the chips)!

A World Quite Mad said...

In France, even the McDonald's food is good. Hard to believe I know. We got desperate because nothing was open and broke down and ate at one. I don't recommend it on a regular basis, as you're in France for godsake, but it's not crap like in the States.

i still dont like snails even if the french make it

FYI, Zip: Salad DOES come after the entree!!! (in order to cleanse one's palette for the meal's crowning glory from the in-house Patisseriere!!!!)

No one on earth can present a dish of any kind better than the French. They can make a baloney sandwich plate look like a work of art and taste like a slice of heaven.