What's Next for This Creep? 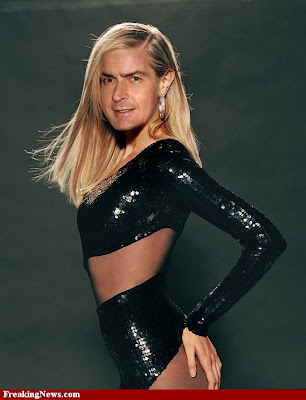 Charlie Sheen was rushed to a NYC hospital in the wee hours of Tuesday morning after a major, drunken freak-out at a hotel.
The prostitute who was with Sheen at the time said he was screaming and throwing furniture all over the hotel, causing at least $7,000 worth of damage. She told police she "feared for her life."
Sheen was in NYC with his ex-wife Denise Richards and their daughters, who were staying in a separate room from Sheen. They had gone to the theatre and to dinner earlier that night.
Sheen has one month left on his probation for spousal abuse in Colorado, and consuming alcohol is definitely a term of his probation.
His attorney claimed Sheen "...had experienced an averse reaction to a prescribed medication he was taking."
Is this a bad joke?
The guy is a drug addicted, alcoholic woman beater who's been in and out of rehab more than anyone in Hollywood. He defines a Teflon personality.
His show's producer said production of his show, "Two and a Half Men" would resume as soon as Sheen returned to California.
If ordinary people are expected to obey the law, not beat-up anyone, not pull knives on people when they're dead drunk, not to keep repeating and treating rehab like it's a silly joke, not to drive their $100,000 cars off the same cliff twice, and not to be assholes in general, can someone please tell me how Sheen keeps getting away with all of it?
Why would any television network continue to tolerate this criminal as one of their VIP stars? If they had even an ounce of integrity, they would put principle above profits and make an example of this slime ball.
Are you as outraged as I?
Tell us about it.
Posted by Karen Zipdrive at 10:46 PM

and the masses - well they just love the real life soap opera.

Lindsay Lohan is a danger to herself.

Charlie Sheen is a danger to others.

do you think the judges who preside over these cases are afraid that fan clubs have posses?

This fuckwad screws up and gets a new contract that will pay his stupid fuckwitted ass more money per episode than anyone else in the business. WTF? What other business rewards such fucking idiots?

I have no problem boycotting the show & encouraging others to do so.
I heard someone going on about how it affects jobs for others on the show..... seriously???
Charlie Sheen should have thought of that before he effed up big time again.

If the network does not have the balls to pull the plug on that lame ass show & Sheen's BS, we the people sure can & should.