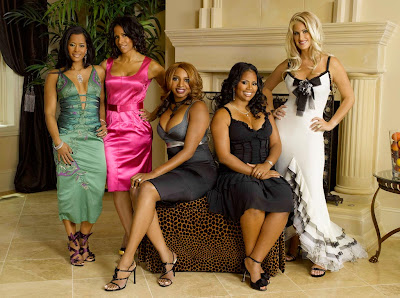 Here are my ratings, from best to worst.

1. The Real Housewives of Atlanta.
They are hilarious, bitchy, quick witted and likable. They also are more camp than a cruise liner filled with gay men. And singer/housewife Kandi Burris is amazingly talented, for real and funny. Black women are often natural comedians, and these bitches really bring it. Housewife Kim Zolziac recorded a song called, "Don't Be Tardy for the Party," with the help of Kandi Burris and a shitload of Autotune. Now she's a gay-boy icon, but her natural singing voice is tres Olive Oyl.
2. The Real Housewives of New York City.
Hey, I happen to love New York Jews, and this show brings a couple of doozies. Though not as campy as Atlanta, with NYC as a backdrop it's enough like Sex & the City to make it worth watching. Housewife Kelly Bensimon is certifiably insane, which adds to the show's elan. And the so-called Countess Luann DeLesepps recorded a particularly obnoxious song called, "Elegance Is Learned." I'd love to punch her in the neck.
3. The Real Housewives of New Jersey.
While the Jersey housewives and their families vehemently deny any Mafia connections, there's a lot of fishy stuff going on. Plus they have some ridiculous wives on this show--like Danielle Staub, the craziest, meanest bitch ever to draw a Bravo paycheck. She's been fired for being so horrible, but there's still Theresa, her mobbed-up husband Joe and their bratty, sequined and bedazzled daughters.
When I watch this show, my TV starts to smell like oregano. I love it.
4. The Real Housewives of Beverly Hills.
With just one show in the can, it's hard to tell how this one will turn out, but the bitches are all filthy rich and have a lot of B and C List Hollywood connections. So far I haven't spotted a housewife with whom I feel any attachment, but it's too soon to tell.
5. The Real Housewives of Washington, DC.
The Mean girls pick on (justifyably or not) Michaila, the publicity whore and her putz of a husband Tariq, whose major claim to fame was crashing the first White House State Dinner. None of the wives seem like anyone you'd want to have a drink with, except for maybe the lone African American woman and her cool husband, who seem pretty real. Cat, the British housewife, is meaner than a drunk London fishwife, and seems not to understand when to hold her acid tongue. I like her, but first I'd like to slap her just to get things off on a even keel.
5. The Real Housewives of Orange County.
If you like vapid women filled with silicone, spray tans and outrageous materialism, this is the show for you. None of the characters, the men in their lives, or their children have any appeal whatsoever. If I had to spend time with any of them I believe I'd have to slash my wrists. After viewing it for one season, I had to stop watching it. It makes me wish for an Orange County earthquake, and that's not good.
Do you watch any of these? Which is your favorite?
Posted by Karen Zipdrive at 8:36 PM

Email ThisBlogThis!Share to TwitterShare to FacebookShare to Pinterest
Labels: Zipdrive Rates the Housewives

Where are you ranking TRH of D.C.? I thought the White House gatecrashers would rate Pulp Friction commentary.

Oooops I forgot the DC housewives. Correction to come.

i was wondering about that, but i don't watch any of the housewives' shows, so i figured the dc show got canceled.

p.s. it was in the news that one of them (don't know which group) is getting divorced. ~yawn~

Vicki Gundledork from the Orange County Housewives is the one who's divorcing her husband.
Naturally, they renewed their vows last season on the show, so it was the typical last nails in the coffin.
The phenomena of the Housewives franchise is how consistently these ordinary women taste a little fame and become hideous monsters, on and off camera.

***UPDATE***
I watched another episode of the Beverly Hills version and I found the ladies equally obnoxious as the OC wives.
They're just richer.
And Kelsey Grammer (the creep) was wise to dump his creepy ex. She thinks her talent surpasses his and she resented being in his shadow, but she sure loved spending the money.