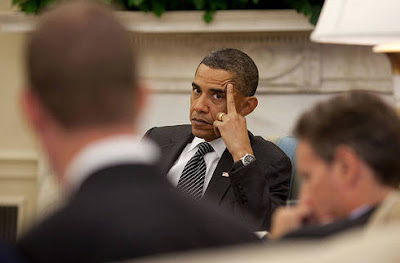 You gotta hand it to the dastardly Republicans and teabaggers.
They actually pulled it off--putting a covert GOP agent disguised as a progressive liberal Democrat in the White House.
This Obama character has turned out to be John Boner's Lhasa Apso.
Obama will go down in history as the weakest, most duplicitous president in American history.
Back in 2008, I told you people to go for Hillary Clinton.
Oh sure, she's a warmonger and a bitch, but she would have NEVER allowed the Republicans to shit all over her like they have Obama. And she would have out-Nixoned foreign policy.
The GOP has the ignoramus electorate all worried about Islamic terrorists and the second amendment while they ransack the treasury, pork barrel the wealthiest corporations (and individuals) in the nation, and run us into bankruptcy.
Meanwhile, Obama claps his hands in victory each time the GOP rams another horrible plan down his throat.
Who knew this once-brilliant orator would turn into a quivering Don Knotts once he was elected?
What exactly does he stand for?
What election promises has he kept?
I don't think he's evil per se, I just think he's a lily livered coward and a full blown masochist. He's meeker than any Democratic president in history.
I have lost all respect for him because he's a sniveling coward.
He's a turncoat.
He's a right-wing conservative in black face make-up.
What a fucking dud.
I simply don't care about politics anymore.
I think America is going down the drain, and it's too late to stop the downward trajectory.
I'd rather keep up with the Kardashians and watch Netflix movies than pay any more attention to radical right politicians who've ruined a once-great nation.
Posted by Karen Zipdrive at 8:41 AM

Email ThisBlogThis!Share to TwitterShare to FacebookShare to Pinterest
Labels: Obama: A Total Failure

Spot on! Remember we "met" as passionate commenters and bloggers in the progressive internet world...and I too have made my online postings about other passions. Mine is snow skiing. I figure there won't be skiing in another 20 years due to the fact that Obama (led by TeaParty/Koch Bros) will allow the environment to continue to heat up so....ski while the snow blows! :)

We fought hard but we're where they wanted us to be all along - complacent and indifferent to the governance of our own country.

Our elected officials exist only to help the rich teabag us and they're using communist tactics to secure the wealth of its ruling class.

Obama can continue to spew his eloquent lies and kiss all the white asses he wants, I won't ever contribute money, time or even well wishes to the Democratic party.

(and I almost never say that word in blogworld)

You've got me. I cannot stand how the Clintons caved to the powers of wealth (personally enriching themselves enough to throw their daughter a multi-million dollar wedding when they came from very modest beginnings themselves (and, yes, I know all about Hillary's Methodism)) when they were our "leaders" with NAFTA and bombing and torture of those on welfare on their watch, but when you're right, you're right.

Shit on all these Obamaites.

They've proved now once and forever whose side they are on, so I give them up.

And it ain't ours.

Once again you are correct. I should have listened to you when I voted in 2008. I am tired of his platitudes.

We both agree on one thing: We need a LBJ style democrat to run this country and turn this boat around. Unfortunately I don't have a suggestion.

I have lots of things I am pissed off @ Obama about... but you asked what he stands for & what promises he's kept, so here are some:

• Appointed Sonia Sotomayor, the first Latina, to the Supreme Court (2009)

• Spoke at the annual dinner of the Human Rights Campaign, a gay rights organization (2009)

• Proposed that the Pentagon repeal the “Don’t Ask, Don’t Tell” policy; placed a “freeze” on current efforts to remove alleged homosexuals from the military (2009)

• After eight years of neglect, the Justice Department and EEOC are again enforcing employment discrimination laws (2009)

• “Don’t Ask, Don’t Tell” will no longer be official policy.

• Signed Executive Order to promote the federal government as a “model employer” when it comes to hiring the disabled (2010) * Note: This includes new efforts to increase the recruitment, hiring, and training for the disabled

• Signed Fair Sentencing Act (2010) * Note: The Administration continues to deescalate marijuana interdiction and raids; increased dramatically the amount of cocaine one must possess to be sentenced to jail; eliminated mandatory sentencing for first-time drug abusers and simple possession

• The federal government will offer direct student loans, cutting out the cost of private banks (“middle man”) who increase the costs in order to make a profit (2010)

• Ended the Bush-era “blackout” imposed on media coverage of the return of fallen US soldiers (2009) * Note: The media is now permitted to cover the story pending adherence to respectful rules and with the approval of the fallen soldier’s family

• Ended the Bush-era “black out” policy on media coverage of war casualties (2009) * Note: Full information is now released for the first time in the War on Terror

• Ordered better body armor to be procured for US troops (2009)

• Authorized construction of additional health centers to care for veterans (2009)

• Eliminated co-payments for veterans who are catastrophically disabled (2010)

• Authorized the “Cash for Clunkers” program that stimulated auto sales and removed old, inefficient, polluting cars from the road (2009)

• Ordered the FDIC to beef up deposit insurance (2009)

• Ended the Bush-era policy of protecting credit card companies (2009) * Note: In place of the old policy, new consumer protections were instituted and the industry’s predatory practices were banned

• Ended the Bush-era policy of offering tax benefits to corporations who outsource American jobs (2009) * Note: The new policy promotes in-sourcing investments to brings jobs back to the US

That being said, Gitmo is still open, we are now in 3 wars, nothing safe & clean about Nuclear, coal or, offshore drilling.
We need to get serious about alternative energy sources, that really are safe & clean.
And really General Motor- you of all companies (recent bankruptcy & gvmnt bailout) should know this company is in deep financial trouble-- so coming up with a $40,000 electric car....
not the brightest idea.
Obama does seem to waffle & cave- even when he had a fricking majority in both the house & senate for 2 whole years.

Now has has to spar w the party of NO, but at least has a dem majority in the Senate.
Still, the GOP/tea party are pitbulls that must be restrained.

Am I thrilled about the guy in the whitehouse
with the Nobel peace prize who has us in 3 wars?

No, but he did beat the alternative.
If it comes down to voting for Gingrich, Trump, Romney, Huckabee or god forbid, Palin or Bachmann....
I would hold my nose & vote AGAINST all of them .

For the record, I can't stand the Kardashian bullshit.

ditto to all that fran said, and i would add that the u.s. is a lot more respected throughout the world than it was when chimpy was in office.

am i in love with obama? no. i think he's a decent man with good intentions. but i've never idolized him. i don't idolize any politician, because no matter how good or decent they are, they will always disappoint you.

also, it is small comfort to have been right from the beginning :-(

Yeah, obama's a real peach. Probably too nice of a guy to be prez, like Jimmy Carter.

Paul Krugman has it right... rather than negotiate with the Right, Obama negotiates with himself and caves in before he even gets to the table.

DC knocks out the part of your brain that understands the lives of the rest of us.

That said, there has to be something between politics and the Kardashians.

Thank you for posting this. I've been resisting the urge to tell my friends "I told you so" but ... Grrrrr! I did! I told them over and over that we didn't know what we were getting with Obama, and though Hillary Clinton was far from perfect (heck, even Dennis K. isn't perfect!), at least we knew what she was all about.

Obama starts the compromise in the center and moves ever farther to the right. Which is not compromise but capitulation.

Thanks to Obama and his idiotic advisers, we're going to have a Republican in the White House after 2012.

Fran, you know I consider you a valued commenter, but I have a PR background and if given the right incentive, I could create a thousands words of praise for that low-life imbecile Sarah Palin.
I don't care what Obama's done or tried to do, I voted for a progressive and would have settled for a liberal.
What we got instead was a right of center moderate who tries too hard to please those slimeball Republicans.
Three wars?
Gitmo?
Same old gay words witout deeds?
I didn't vote for that shit.

Let's see now... Clinton sold out gays with DOMA and Don't Ask, Don't Tell... Obama hasn't the courage to overturn the latter--he wants Congress to do it, though it won't.

Democrats, as a group, are fundamentally spineless, and they lack the humility to surrender their individual egos to the shaping of a basic message. Don't tell me that Hillary would have done any better. I simply don't believe it.

In the meantime we are all missing out on the Blogtastic opportunity of the sorta-candidacy of the Trumpster.

What are we waiting for?