Stick With Reality TV, Ya Putz 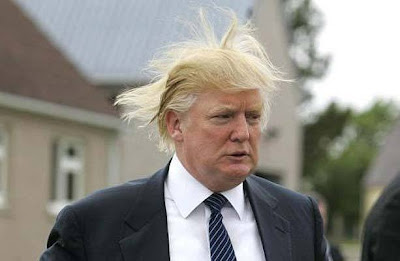 If Donald Trump was serious about a presidential run instead of just trying to drum up publicity for himself and his Apprentice shows, the birther card wouldn't have even been in his deck.
One would think that this self-proclaimed business expert/quasi-billionaire would attack Obama's economic policies, but no, he started his so-called campaign with this hackneyed, teabagger birther issue that's been debunked at least a thousand times.
Hell, even a monkey with a keyboard could find a copy of Obama's Hawaiian birth certificate online in about three minutes.
Besides, Donald Trump has more dirty laundry than Amy Winehouse's steamer trunk after a month's vacation.
Like what?
Oh, I'm glad you asked.
Trump has continually violated anti-trust laws and settled for millions and millions of dollars.
Trump screwed the state of New Jersey out of sales tax for his yacht purchase.
On that yacht, Trump exploited women whom he hired to parade around in bikinis while he was making business deals with other dirty old men.
Back when Trump was married to his first victim, Ivana, he had the colossal balls to move Marla Maples, his then-mistress, to the apartment right next door to the Trump's apartment in Trump Tower.
Ivana Trump was employed as CEO of his Atlantic City hotel and casino, but in the divorce he tried to say she was neither associated with nor entitled to any of the value of those community properties.
As part of their prenuptual agreement, Trump insisted that Ivana signed the document which excluded "dating other people" as grounds for divorce.
After their divorce, Ivana Trump had a free ride discussing her failed marriage in the media, but Trump used his good-old-boy buddies in the New York Supreme Court's Appelate Division to gag her, in a 5-0 vote.
After he broke it off with his second victim Marla Maples and hit the dating scene, Trump was screwing so many women he insisted they all get AIDS tests before screwing them. He said of his testing rule, "It's scary out there."
So, we know he's a devout cheater and avid pussy hound.
We also know he's had more shady business deals than Bernie Madoff.
We know he's a bloated egotist who craves media attention like a junkie craves heroin.
And we know if he started putting his toes into the shallow end of the GOP presidential hopeful pool by splashing up the birther issue, he's got nuthin.'
I'd like to buy that douche bag for what he's worth and sell him for what he thinks he's worth. I'd be a zillionaire.
Posted by Karen Zipdrive at 11:27 AM

Email ThisBlogThis!Share to TwitterShare to FacebookShare to Pinterest
Labels: Trumped Up B.S.

I think he thinks he's as pretty as the women he screws.

What they actually have in common is that all of them will do anything for a buck, honest or otherwise.

He is possibly the origin of the expression "trumped up", as is his bullshit run for the White House.

Oh my - this is brilliant. Even if the post wasn't great (oh but it is) the title and the photo would carry it!

how does a casino go bankrupt? seriously, this is the brilliant businessman? if his daddy hadn't left him a fortune, he'd be scrubbing toilets with his hair.

I have a fantasy that involves his being sandbagged by a bunch of goons who shave his head, the better to show us what remains under that landscape he calls a hairdo.

He won't run, too many skeletons. He hooked up with mobsters to set up his gambling establishments and he dodged the draft with a medical deferment but lied and said he avoided the draft because he was just lucky enough to get a high draft lottery number. And that's just the tip of the iceberg.

I am late to the party as always, but he is also a big douche racist slumlord.