Oh No!
Aren't There Already Too Many Republicans in the Closet? 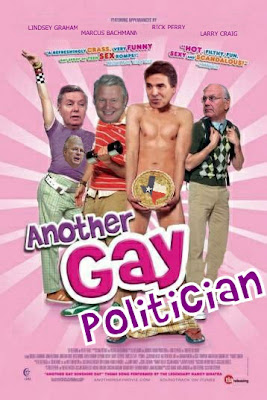 Ordinarily, it would be great to have so many gay men in politics. Think of all the long-overdue gay rights legislation they could introduce and pass into law.
But not this crowd of sneaky Nancy Boys.
When living life on the down-low, the guilt and self-loathing must be hard on a queen.
Having to express your love to someone in an airport bathroom stall, under some one's desk, or even in the bedroom of a governor's mansion, has to be hard on a guy, and I don't mean hard in a good way.
Poor Marcus Bachmann has to pretend he's madly in love with his shrewish beard/wife Michele, all the while sneaking peeks at the creased and faded photo of Johnny Depp he keeps hidden in his wallet. He even had to make up an excuse to socialize with hunky gay men by posing as a therapist who turns gay men straight.
So sad, really.
And I feel so sorry for Larry Craig as well, trying to find love in a Minneapolis airport stall, when all he can see is the guy's shoes and whatever he's poking through the glory hole.
Then there's Lindsey-poo Graham, who has had to hide his adoration for his studly war hero John McCain because people just don't understand a man's manly love for a conquering gladiator.
Then there's king-maker Karl Rove, who launched the careers of studly George W. Bush and dashingly handsome Rick Perry.
When Rove met Bush for the first time, he said, "George's father had sent me to the airport to pick him up, and there he emerged, looking fabulous in a worn, brown leather bomber jacket, with Wranglers so tight you could see where he kept his chewing tobacco, and great looking cowboy boots--the kind a rodeo star would be proud to own. Yes, I could barely keep from swooning when I first laid eyes on him..."
But then he was also impressed with Rick Perry.
"I met Mister Rick back when he was a low-level politician, and God forbid a Democrat. I asked him if he needed a back-rub because he looked so tense. He said yes, then slowly peeled off his pearl-snap cowboy shirt and tossed me a bottle of creamy lotion.
As I kneaded the panther-like muscles in his back, he moaned deeply. I whispered to him, 'Rick, do you know the secret initiation ritual we use to welcome Republicans into the party?' When he shook his mane of silken locks, I rolled him over on his back and slowly filled my mouth with lotion and made my way down to his manly decision making spot..."
Yes, poor Karl has had to make do with advising the men he loves, when all he ever really wanted to do was love them, mano a mano.
And Rick Perry might be the saddest story of them all.
When he met his one true love Geoffrey Connor, he was only too happy to honor him with political appointments--assistant secretary of state, secretary of state, then when he was almost on the verge of promoting him to Lieutenant Governor of Texas, in walks his wife Anita as they were caucusing and she caused a scene.
She screamed, "Rick, goddamn it, have I caught you caucusing AGAIN?"
Frightened, Geoffrey ran away and out of Rick's life that day, and poor Rick has had a sour face and bad disposition ever since.
Guys, I have a word for you about living in closets.
They are only for clothes, fabulous shoes and accessories, not for guys like you who look like you've just stepped off the stages of Paris fashion shows.
Trust me, your teabagger and Christian fundamentalist voters and contributors will understand if you just tell them who you really are.
They will liken you to heroes in history, who glorified their love for mankind by loving as many kinds of men as there are.
You're safe, guys.
The world loves you.
Come on out, there's dancing and music, and a rainbow of guys just waiting to meet you and run their huge American flags up your poles.
Posted by Karen Zipdrive at 4:35 PM

there's a new one. meet phillip hinkle who found a guy on craig's list, met him in a hotel, and paid him 80 bucks. but he's not gay. he only wanted someone to look at the view with him.

no wonder marcus bachmann can afford a big new house. he gets his client lists from the rethuglican party, and there's no end to rethugs who want to pray away their own gay.

The big surprise these days is if an R is caught having an affair with the opposite sex. It wouldn't be so bad if these guys weren't such self loathing haters that bend over backwards to enact anti-gay legislation.