...another Thing About Paris 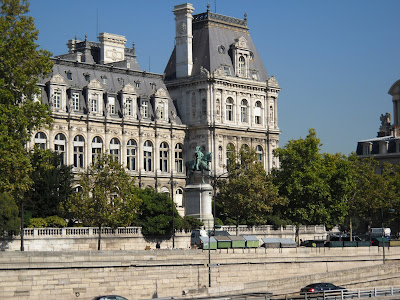 At the time I was there I missed knowing what was going on in America. We had a little TV in our flat, but the only thing we could get was a non-stop Paris show about fashion models and Jay Leno, only without commercials.

Now that I'm back I'm reminded how we are circling the drain financially, culturally and intellectually in America, and there's not much of a god-damned thing any of us can do about it.

It was fun to walk around in Paris not knowing the historic significance of much beyond the big stuff like the Arc de Triomph, the Eiffel Tower and the Mona Lisa being at the Louvre. For instance, I have no idea anymore what this photo represents, but I'm sure it must have had something to do with a battle, a victory or something the French said or did better than their competitors.

It was nice going to a nearby newsstand and asking in my horrible French if they had any magazines or newspapers written in English, only to have the arrogant clerk proclaim proudly,"Non!"
See, I think the French may like us individually, as long as we don't invade their country or cities with our fanny packs filled with tour guides and acting like rude, demanding assholes who demand everything be Americanized for our convenience.

If I knew at age 14 I'd end up liking Paris as much as I did, I would have started learning French back then, so I could actually earn enough money to live there as a writer, painter or even as a chef. I could see myself living in a tiny, free rent closet atop the Shakespeare bookshop and trying to write something publishable.

The trouble with discovering a new place to love is when you're there you long for home and when you get home you always remember more things about the other place you didn't have time to see.

There are some things I do not miss about Paris.

For one, those omnipresent skinny baguettes would rip up my palate and damn near scare the porcelain crowns right off my teeth. They reminded me of eating artichokes: too much work for too little reward.
For another, they have these heavy, annoying 1 and 2 Euro coins they just love to fob off on customers. But if you try to pay for, say, a 20 Euro dinner with 20 Euros worth of coins, they look at you like you're some broke-ass chump who had to raid her cookie jar just to scrape together enough pennies to eat.
And while I liked the antiquity of cobblestone streets and sidewalks, those little bitches are hard to walk on after about 20 minutes.

I realize that in not knowing enough French to understand what was going on around me in Paris, I was freed from the excess political and celebrity curiosity I have in America. Though I missed not knowing what was going on in the States, at least my brain had time to rest, my feathers had time to unruffle, and so did my typing fingers.
Posted by Karen Zipdrive at 4:59 PM

Email ThisBlogThis!Share to TwitterShare to FacebookShare to Pinterest
Labels: I was a free man in Paris

is jay leno any funnier in france?

Being forced to leave all that baggage behind sounds like a perfect holiday.

Learning french is quite hard.Did you managed to learn it?I was challenged to learn few french sentences by my french office colleague who promised me to give treat anywhere in paris.To his bad after lot of struggling i managed and yes i enjoyed the treat in paris.Food in paris are cheap and taste good.

You earn enough to live there now Zip, and your French was good enough to get by just fine...so?? And you can skip the baguettes and order jambon on senior-friendly panini.

The photo is in front of the Place de Hotel de Ville and I think that's Henry IV on his high horse. I recall because of the many many many sculptures of men embedded in to the walls of the Place, which really isn't a "Hotel" but a government building. The building/sculptures aptly represent the sausagefest known as Le Marais.

Sis, I'm about 100% sure I do not make enough now to live in Paris, but thanks for telling us what that building was.
I should have figured it out because I passed by it so many times since it was in our neighborhood, Le Marais du Sausagefest.

"It wasn't what Paris gave you... it was what it didn't take away."

Nonnie, actually we were so excited to get Jay Leno on TV he seemed about 200 percent funnier than usual. And the idea that his show ran without ads was an added bonus.

Ranjeet, I am fairly good at learning languages but French is extremely hard for me.
Rolling my R's from the back of my throat is like dry gargling.
On a one to 10 scale, I'd give myself a two.
I may take a French class, but I'm pretty sure I'd only earn a D.