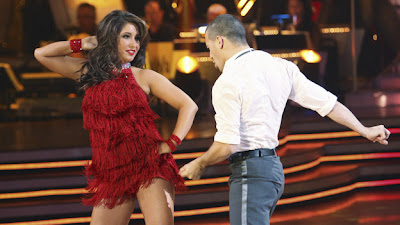 Dancing With the Scars
Oh, no.
I've been a little late to the party in terms of viewing the new season of Dancing With the Stars, but I made it a point to watch it tonight because my lurid curiosity about Bristol Palin could no longer be quelled.
Yeah, yeah, we all know she's a shy teen/unwed mother from Wasilla, Alaska who should not be judged too harshly because she's not a professional entertainer and...aww, bullshit!
It's called "Dancing With the Stars," not "Boot Scootin' With the Trailer Trash."
There's no reason why the American TV audience should have to be subjected to this hog on ice whose only claims to fame are a greedy mother with borderline personality disorder and a slacker baby-daddy who was and is way too hot for the likes of this sister wife-lookin' chick.
In a sense, Bristol Palin is even more obnoxious than former contestants like Tom DeLay, Kate Gosslein or Wayne Newton because at least those hams tried to put on a show.
Bristol Palin just sort of stands there and forces her dance partner Mark Ballas to drag her from point A to point B. And it's not a light haul for him, either.
While I'm the first to admit my body is hardly that of a dancer's, I'm not on stage anywhere subjecting anyone to my total absence of dancing ability and my zaftigity.
Her baby is a one-year-old.
The baby weight should be gone by now. God knows her mama can afford to hire a personal trainer for her so she could work off some of that mucktuck she's got around her belly, ass and thighs before she hit the stage of DWtS.
To me, her lack of talent and apparent lack of interest in the show (other than financial) is insulting. For her to show up so out of shape and so lackluster proves to me she's a lot like her mother--she'll do anything for money.
Fortunately, the judges don't seem to give a damn about teabaggers calling in death threats, because they are calling her dancing as they see it and blasting her for it.
If the first two contestants voted off were those creeps David Hasslehoff and Michael Bolton, it makes me think the judges are boldly thinning out the herd early.
If that's the case, Bristol won't last long.
I mean come on, The Situation also is a contestant, but at least he showed up in great shape.
Posted by Karen Zipdrive at 8:14 PM

Thank you for watching it for me and giving your candid assessment - it saved me the grief of watching. I don't like this family, but if I was to complement any Palin, it would be Todd because he doesn't talk.

i've been waiting for you to chime in on dwts, zippy! the judges have been way too kind to bristol. like you said, her partner schleps her around the dance floor while she does the only move she knows how to do--wave her finger. the judges keep making excuses for her lack of experience, but what really makes me want to vomit is how they introduce her as an activist. the only thing she's active about is collecting money wherever she can get it.

she's got the personality of old lox when she dances and when she speaks.

p.s. you're very lucky that you missed the episode when her bitch mother was on, trying so hard to make it look like she had any affection for her children. sickening!

I want to see Michelle Duggar on DWTS. Maybe she'll be pregnant and Lance "I have only one nut" Armstrong dance with her. I suspect it will be analagous to a Saturday morning bisquit breakfast at the South Austin Viceroy house.

The make up people managed to make Bristol look older than her mom!

What is with her dance partner always touching her?

Mama Sarah is grooming her to be a demimondaine. The perfect Republican occupation for an uninteresting young woman.

In the meantime she gets to play dress-up (whatta costume there).

I guess Levi didn't like having to do all the work.

meanwhile, ABC laughs all the way to the nielsen bank - they really should just do a whole show on the Palins......

and despite wearing red - she STILL is trailer trash