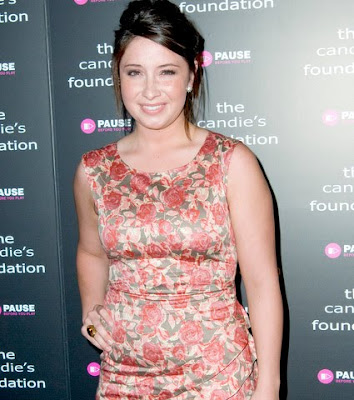 Tonight on Dancing With the Stars I watched Britney ooops Bristol Palin dance the rumba.
She was trying to dance sexy, but she's like that woman we've all slept with (well, many of us) who's a dead fish in bed.
Even though her parents, the Panderin' Palins were in the audience, the judges yelled at her and basically told her she was talentless, which she is. She scored a 32 out of a possible 60, if that tells you anything.
I wish we could pay to vote people out instead of call to vote people to stay.
I'd spend a C note to send that ditz back to Wasilla.
Posted by Karen Zipdrive at 9:24 PM

I know you live for this stuff, KZ, but it raises your blood pressure to absolutely no good effect. Granted, it's financially cheaper than a high maintenance girlfriend. Still, there are hidden costs.

i keep hoping she'll fall flat on her face and embarrass herself. oh wait, she's already embarrassing herself. it's quite obvious that even her partner knows she's got the personality of a dead flounder, as he keeps doing solos to eat up a chunk of the 90 seconds they have for each dance. then he schleps her around for the rest of the time.

Matty, If making me guffaw raises my blood pressure, then let it raise!
Nonnie--perfect description.

Oh, sis, you just have to tune in next week (if she hasn't been eliminated by then)to watch her lackluster "dancing" efforts.
It's almost funnier than the clips of Sarah Palin with the guy slaughtering turkeys behind her.
Remember when our cousin made us watch a video of her talentless daughter's dance recital? Okay, it's funnier than that, I promise.