I'm Christine O'Donnell and I Am You.
a paid political ad 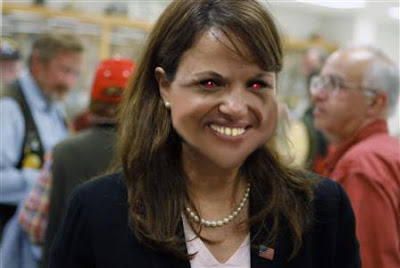 Hello. My name is Christine O'Donnell and I'm running for the senator of Delaware.
I'm not a witch, I am you, and you're not a witch, now are you?
Like you, I'm a Virgo, but also too like you, I think astrology is the devil's datebook.
A lot has been said about my stance against masturbation, but like you, I don't do it, never have done it and never will do it, because like you I think it's the devil's jazz hands looking for cheap thrills, and it's just wrong with a capital R.
Like you, I am a Roman Catholic from a large, Irish family. We are just like the Kennedys, except we are not adulterers, murderers, sex fiends or Democrats.
In fact, we are so wholesome, my father used to fill in for Bozo the Clown when we lived in Philadelphia, which is your hometown just like mine.
Like you, I love Philly cheese steaks, only without the green peppers because you and I get gassy when we eat them.
Like you, I am 41-years-old and have never married. I enjoy celibacy, just like you do. There's nothing I hold dearer than holding my Holy Bible to my heaving bosom and calling Jesus Christ's name out loud as I feel the rapture. Sound familiar? I thought so.
Like you, I probably graduated from an ivy league college with honors. And of course you and I did graduate work at Columbias University, where we may have majored in English literature or public relations.
Like you, I don't think Darwin's theory is nothing more than one crazy man's opinion, because we believe that God created the Earth in 7 days just like it says in the Bible. Or maybe it was six days and then a day off for church, but God did it and you and I know it.
If we were descended from monkeys, why aren't monkeys still turning into humans and evoluting like the left-wing atheists say they did? When a lady gets married and has a baby, if evoluting exists then why doesn't she give birth to a baby monkey who changes into a human at age 2 or 3? See? Just like you, I don't buy into these insulting theories when God's Good Book explains about how Adam and Eve turned into human beings so they could learn to love Jesus like you and I do.
Like you, I bailed on a mortgage and was almost evicted until my then-attorney/ boyfriend bought the house. And like you, when we were together we did not have sex because we did not marry.
Also too like you, the IRS filed an $11,000 lien against me this year for failure to pay back taxes. Like you, I was singled out for being different and not giving in to the IRS agent's perverted sexual demands.
I am you. We both oppose abortion, even in cases of rape or incest. But if the mother's life is in jeopardy, then her husband should get to decide who dies.
I am Christine O'Donnell and I am you.
Jesus wants me to be the senator from Delaware and so are you.
So, thank you, and may the saints be with you before the devil even knows that you're dead.
Posted by Karen Zipdrive at 12:27 PM

It's like something made up by The Onion except even more absurd. And yet, it's real.

I actually pulled most of that stuff off Wickipedia. She really is that nuts.

We have a small political party that contests the more high-profile seats during a general election, in clown costumes and with zany "policies" to match - the Monster Raving Loony Party. Never elected, a political irrelevance.

I doubt they'd let this simpleton stand for them.

you forgot to add in how she (and we, because she's we) pay our expenses by running for office. i know that when the electric is due, i print up some 'nonnie for senator' signs and wait for the neighbors to make campaign donations.

She's a total sociopath who obviously uses her Gidget Goes to Washington looks to get what she wants.
The last thing we need is another Republican grifter in office.
And I'm sorry to say this, but a 41 year old virgin who's not a nun has some deep psychological issues.

she's not a virgin, zippy. she's admitted to getting her dinky stinky when she was younger. in addition, her neighbors said that there are very thin walls where she lives, and she's been doing the nasty while she's been preaching to everyone else.

Fuck me running, this was awesome. Gawd I adore you KZ! And I hope to hell the Rangers win tonite. I despise those friggin yank$.

somehwere behind those red eyes lies the brain of a mouse.