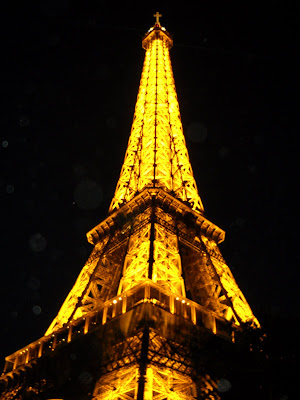 It makes me sick that the U.S. State Department is warning American tourists, students and business people to be extremely careful while visiting Europe.
It seems Osama bin Laden and his gang of godless idiots are hatching plans to go after metros, trains and places where tourists congregate, like the Eiffel Tower, the Louvre, etc. etc.
Having just visited the tower, I can vouch for their security. It was almost comforting to see so many clusters of heavily armed SWAT soldiers standing at the ready. I seriously doubt any terrorists can get close enough to the tower to mess with it.
While we were inside the Louvre, there were three danger alerts. Metal curtains closed over all the windows and people were asked to leave the building. However, museum employees seemed pretty blase about the whole thing and told us we could just ignore the alarms and directives to leave the building. Perhaps they should rethink their laxity.
It's the trains and metros that worry me. During rush hour those things are so stacked with people it's a wonder all the different colognes don't create a toxic, combustible cloud.
By day six of our visit we blew off the metro and started taking taxis everywhere. They weren't that expensive when split three ways, and they were a lot cleaner and less jostling than the metro, not to mention those endless stairways I hated so much.
When 9/11 occurred, it seemed to me NYC and the WTC were natural targets for those terrorist bastards. The world embraced NYC as their own and we all felt the sorrow and rage.
Now I'm worried that cities like Paris, Rome, London, Amsterdam, Berlin, Madrid and so on will have to endure similar assaults. Terrorists don't give a damn about history or art treasures or human lives--they just like to create maximum havoc, and for what? Do any of us know for sure what they are after?
The State Department's warning is set to last until January 11. The randomness of the date makes me think the spy chatter that triggered these warnings must be pretty damn specific.
It's worrisome.
What advice do you have for Americans traveling to Europe?
Posted by Karen Zipdrive at 1:15 PM

i've never gone to europe, but if i did go, i think i would tell people that i was canadian, not american.

I'd offer the same advice I'd give myself, anywhere in the world - be safe, don't do anything stupid and enjoy yourselves.

I went to Europe right after the bombing of the Marine barracks in Lebanon. It was supposed to be a summer long study tour through my university, but after the bombing and the subsequent warnings the school cancelled the class. I decided to go by myself anyway, and had a great time. My advice would be to take the warnings with a grain of salt, and just follow the basic rules for a woman traveling alone anywhere else in the world.

I agree. You watch where you keep your money, don't flash cash, don't let strangers get too close to you and--this may not be popular but--take taxis instead of the metro.

My daughter spent last spring in Europe. Study program. Rome, London, Paris etc. The terrorists she met were mostly English students hitting on American girls.
she made a video.... you might like it. Your pic of the tower made me think of it.

A World Quite Mad said...

I wouldn't worry about it. You could walk out in front of a bus at home. Or you could die in a car crash a mile from your house. As my father used to say, eat, drink and be merry, for tomorrow you may die. So there's no point in worrying about things, because you squander the present by worrying about things that might never happen.

To be honest, you're more likely to get pick pocketed on the metro by gypsies than be anywhere near the scene of a terrorist attack.

Personally, I wish I had the money to go hang out in Europe, but don't at the moment. You should go on with your life and ignore the warnings. Now, that's not to say you shouldn't be cautious, but only as cautious as you would be normally in any big city. Again, petty crime is more likely.