A Word About Macarons 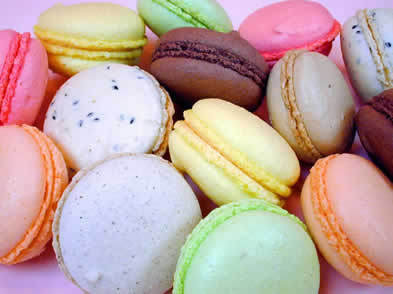 French macarons have to be among the world's most beautiful cookies, and I'm sure they are a hassle to make.
Before I got to Paris, I was jonesing to try one and it's one of the first things I did when I arrived. I bought three big ones to share, in raspberry, chocolate and orange.
They were very odd but delicious--a firm meringue filled with jammy stuff or flavored cream, but one was enough to hold us. They are expensive as hell--one Euro per cookie, which amounts to about $1.28.
Then when I went to dinner at a friend's house later in the week, they served a huge pile of them for dessert. They were the smaller variety so I ate about three of them, in coffee flavor, pistachio and one other flavor I forget.
I have to wonder why they have yet to catch on in the United States.
It's like trying to find a cupcake in Paris--very rare.
Macarons sort of symbolize Paris-- very odd but delicious.
Have you tried one? What flavor? Did you like it?
Posted by Karen Zipdrive at 7:23 AM

Email ThisBlogThis!Share to TwitterShare to FacebookShare to Pinterest
Labels: Macarons

Next time you are in Austin, have BigSis take you to http://laboitecafe.com/

They are not in a trailer but in a shipping container on S.Lamar (and have gotten some design recognition because of that.) They sell a variety of macaroons with some rotating flavors and probably the croissant I have had in Austin.

Cuz2, didn't we have some kind of bet I won that requires you to take me out to eat?
I checked out the menu for Laboite cafe and was amused to see how high the prices are--even higher than in Paris for coffee or a macaron. Quelle nerve!
But it looks like it's worth checking out next time I'm up there.
The shipping container they use as a building is off-putting, but I guess it's some kind of green Austin thing, like those stupid blue corn, vegetarian, fat-free tamales.

I don't know about a bet, but I'll take you, no problem. Those croissants! It'll give me an excuse to eat them--yum!! We can even take Ray Charles.

I tried a beige flavored macaron. I don't get it. Dried up meringue with some sweet paste inside. Just because the French created a cookie that's excrutiatingly difficult to make, doesn't make it tasty.

i thought macarons were like macaroons, which i hate, because i don't like coconut, and most of them have coconut. meringe and gooey stuff doesn't sound like something i'd fly over the ocean for. but they are pretty.

San Francisco has been swimming in the things for at least 3 years--whole stores devoted to them, I kid you not.

It figures that SanFran has macarons by the boatload. They should arrive in Texas in another 8-10 years or so.
Sis, I spit water on my monitor when I read you tried the "beige flavor." I'm not sure if beige is an actual flavor, but it certainly described the look on your face when you bit into it.
I actually liked the ones I tried, but they were not my favorite new cookie discovery or anything.
Cupcakes from the silver trailer on Congress Avenue in Austin are worth their weight in gold.

omfg...I so want one now..and have never had one. Where can I buy those suckers here in the states?

they are all good