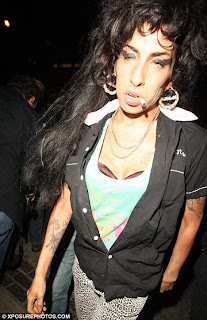 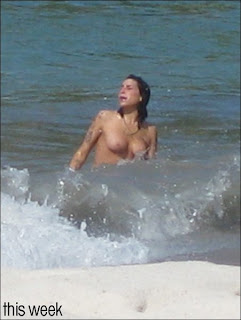 I'm not sure why, but I follow British singer Amy Winehouse's shenanigans on a daily basis.
Maybe I think with my daily attention I can will her to stay alive in spite of her Herculean problems with alcohol and drugs.
But maybe it's just selfish of me in the end because I really love her music and would like to hear more of it as time moves ahead.
I realize the sight of her frolicking topless in the Carribbean is not exactly sexy, but it looks a damn sight better than the usual emaciated, zoned out druggie pics of her I usually see.
She's divorcing Blake incarcerated, thank God, and before he violated probation and returned to prison, he admitted he turned her on to heroin and crack and self mutilation. He's asking for a million pounds to give her a divorce. Sounds like a bargain to me.
Give a chump like him a million quid and he'll shoot it or snort it or drink it up within a month or so.
Winehouse is obviously an habitual personality who's way too impressionable to be around other addicts. I wish she'd meet and fall in love with a decent person who'd help her shape up and get back to the creative life we've all seen in her.
I saw Hendrix, Joplin and Morrison all die at age 27 back in the '70's and it hurt my young psyche. I hope I don't have to see her end up with the same fate.

Here, if you haven't seen her yet, this is what all the hubbub was about.

Posted by Karen Zipdrive at 6:50 AM

Email ThisBlogThis!Share to TwitterShare to FacebookShare to Pinterest
Labels: Amy, Get Well

If she were smart, she'd turn her future over to you right now.

Her music is as good as her life is fucked up. It's been a near constant companion the last year or so. Always just one rifle through the car console away.

I guess I'm not that in love with her music, but I still hope she cleans up her life. No one should die like that.

I like her too. What a waste if she does not get clean...

i can't say that i am a fan, as this is the first time i have actually heard her sing. i love her voice, but entertaining the world and providing fodder for the rag mags is not worth a life. she needs to go somewhere where the cameras are not constantly pointed at her and figure out what's going on in her life and where she wants it to go. she needs a lot of professional help, and for chrissakes, someone make her a sandwich!

Blake will use that mil to finsish himself off if we're lucky. Love her music and tats and beehive but she's gotta eat.

I do like her stuff. Watching her, I get a little amazed that Billie Holiday and Judy Garland and Edith Piaf lived as long as they did, because I think we are looking at essentially the same personality in all those cases.

It makes a difference how messed up your messed up relationships are.

Not a big fan of her's either, but she does seem to have a deathwish.

Its a horrible way to die..being a drug addict..lost a few good friends that way myself.

Love her smokey, tortured voice and wonder if she could maintain that if her life miraculously made a turn toward the sane and sober. Happiness has been known to ruin careers. Hope Amy proves to be the exception.

She needs to plant a pound of horse on Blake and call the coppers on him. That'd take care of that pesky divorce settlement.

If you like Amy, listen to a young Canadian singer named Serena Ryder.

I liked it better when you were completely devoted to Stevie Wonder.