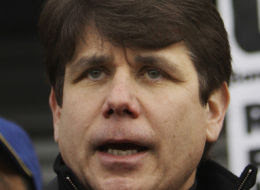 I heard Rahm Emanuel blew the whistle on this miserable crook after he reached out to Emanuel for some payola in exchange for him appointing "the right senator" to replace Obama.
Good for Emanuel.
We all know Chicago politics are crooked, even by Texas standards, but this guy takes the cake.
I think they should tattoo a swastika on his forehead and a confederate flag on his butt and throw him into the general population of the nearest Illinois prison.
Adios, MoFo.
Posted by Karen Zipdrive at 8:04 PM

Email ThisBlogThis!Share to TwitterShare to FacebookShare to Pinterest
Labels: Blagojevich

It's a damned shame-- just yesterday he spoke out in support of the sit-in workers- said the State of Illinois would not do business with the Bank of America- meaning hundreds of million of dollars, until the B of A released funds to the employer to honor their union contract for letting go workers.
Yesterday he championed the cause for the workers.

Hero to zero. Greed & corruption got the best of him.

Because of Blago, the Republicans will probably get that Senate Seat. With that goes any hope for a fillibuster-proof Senate.

wtf is wrong with these guys? seriously, are they really that selfish or is it some kind of psychological disorder? when they leave office, they can make lots of money. they can't wait 4 years? in the meantime, they get a place to live rent-free and they are well-fed. can you imagine these assholes if they had to survive on middle-class wages? you know, back when there was a middle class.

Bless Emanuel for blowing the whistle on this scumbag. I do hope that is how it went down.

My next thought is that I hope the Chicago mob lets Obama live long enough to get something done. I worry that we'll see a repeat of JFK. Those boys play rough and they play for keeps.

If you don't appreciate what you have, don't spend a lot of time with the super rich. I think this guy flipped out after seeing how much money some people actually have. His sad little sense of entitlement was outraged; he wanted a piece of the action. (So much for public service).

Ironically, he did a few good things after he was elected.

Apparently he's been investigated for years. The documentation of his misdeeds was over 70 pages.

And that was the Reader's Digest Condensed Version.

Dawn's comments sort of scared me because I never thought of the whole "mob" thing, but this guy for example must have some kind of connections or he wouldn't be so damn bold about his illegal activity. This could get interesting.

Adios Mofo tickled my very soul. Is this guy's middle name Slobodan by chance ? He has that turn the flamethrower on the daycare look about him and that crazy ass melon of his with that godawful pimpadour is reminiscent of Serb war crimes too. WTF Blogo where's the cigar and fedora while yer at it ? Rahm is nails, gotta love him dropping dime on this prick.

i think he needs a dentist - may he couldnt afford it