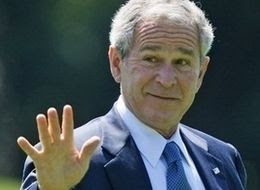 Hmm, it seems the new 'hood the Bushes are moving into after they leave the White House has a little problem.
Dallas's fancy Preston Hollow might be pretty and safe, but they only started allowing non-whites to reside there in 2000.
Oh, colored servants were allowed of course, but no blackies or brownies could live there.
Funny thing, Dallas Mavericks owner Mark Cuban lives there, but none of his black basketball players could have done the same until 2000.
WTF? I didn't know having segregated neighborhoods was even legal!
Damn, it's times like this I wish I was mega wealthy so I could buy a home in that 'hood and turn it into Section 8 housing.
I can just see the ad: "SECTION 8 HOUSE AVAILABLE 6 BEDROOMS, POOL, BASKETBALL COURT. $400 A MONTH ALL BILLS PAID. KIDS AND LARGE DOGS WELCOME. SE HABLA ESPANOL."
Posted by Karen Zipdrive at 7:54 AM

I adore your idea...I would even move there for that. ;)

I'm sure that "no dark-skinned people" rule applies to almost all the fancy neighborhoods in Dallas.

karen,
do you know of any self-respecting people of color (or jews, i bet they don't want them there either) who would want to live near chimpy or his new neighbors?

You know if you did that you'd have the goddamned Wasillabillies and all of their knocked up spawn trying to mooch a free crib off you until Sarah's next run (stumble) for glory...

All the wrong people have money.

My friend from Odessa has relatives still working at the "Club" in Midland where Bush hangs out when he's there. No blacks allowed, but of course the servants are black. So the Bush clan expects black folks to know their place. Btw, he never really completely stopped drinking. Maybe just while he was inside the Whitey House.

LOL! Brilliant idea. Might even want to encourage a Muslim community & build a Mosque as well. Give the neighborhood that international feeling.

Surprised the saudis aren't there all ready...