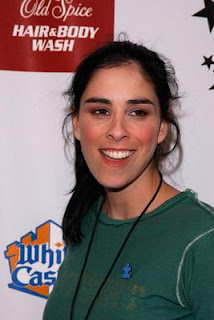 I'll admit she's occasionally funny and I loved her "schlep to Florida to see your grandparents and demand they vote for Obama" bit, but the girl makes me nervous.
She reminds me of the type who'd say something so inappropriate and gross while she's with you in public you'd die of embarrassment.
You know the type.
"This is my friend Betty. She has no uterus or ovaries so she can grow a beard in half a day."
"Say hello to my boyfriend. His penis is only 3" long and his balls smell like gefilte fish. And he constantly plays with himself while he watches bondage porn."
"Meet my boss Rick. He's fucking the receptionist and once I found his spooge on her desk. It was real stringy."
"Today my poop had corn in it and it smelled like kimchee."
"Waitress? Do you have any extra cloth napkins? I feel butt cheese in my pants and I want to get rid of it without going to the restroom."
I actually know someone like her in real life.
She's a drunk and has no boundaries. She'll say the most insulting or embarrassing things to me at dinner parties or small places like that and then she tries to act all innocent so I can't throw a plate at her.
Once we were at a bar and she stood on the toilet and peered over my stall so she could watch me pee. Then she told everyone how much it pissed me off.
I used to work with her and during a staff meeting and she asked me if I was still dating that hot, crazy chick. I wasn't out yet, but that's really something I'd rather do for myself.
We went to Laredo, Mexico once and she expected me to walk over the border checkpoint with her while she had 1,000 Valiums stuffed into her purse and in every pocket of her clothes. Plus we took her car and it was so filthy it actually had fresh and dessicated dog turds in it.
It took us about 45 minutes to clean it out before we left- and we filled two huge garbage cans in the process.
I'm not sure Sarah Silverman is a dirty pig like that, but she's got the same mouth on her- and that makes me nervous.
Posted by Karen Zipdrive at 11:12 PM

Who's been talking about me?

Seriously (seriously!), I read one of your recent comments on Just Ain't Right and took a look at your profile. Are you from San Antonio originally? I went to Trinity back in the 70's and lived in town for another three years. My late wife was a San Antonian. It's a great town, one of my favorites.

Why are you friends with this person? There must be some wonderful reason to counteract all this bad stuff.

Is it something about the name Sarah? Sarah Palin, Sarah Silverman and my stranger than strange cousin, Sarah.

Sarah Silverman is indeed the type to make anyone around her very nervous.

K- yes I am from San Antonio and have lived here most of my life except for a few sojourns to L.A. I live about 4 miles from Trinity. Beautiful campus.
Deb, I'm not friends with this person.
We run into one another on occasion because we share mutual friends. Also we have some minimal professional contacts because we're in similar fields.
PoP- Most of the Sarahs I know are pretty calm and staid. Must be the newer generation of Sarahs giving the bad raps.

These remahks show that Sarah Silverman lives in YOU, if you will only let her out.

Oh, yeah... that's right. They only work for Sarah because she's a pretty, fresh-faced young thing who manages the disingenuous look while she utters them...

Oh there is definitely a "spot it, you got it" aspect of my observations.
I have to constantly check myself before I say things because I tend to step on a few toes inadvertantly.
It's my mom's fault. She was the same way.
:)

I am always torn w/Silverman too... I like her sometimes, and then I can't stand her at others. Maybe that's why, the over-the-top no boundaries thing. Good post.

If I recall, your piggy friend was beautiful. Was that a factor in letting her get away with stuff, hmmm?

The problem I have with Silverman is that once she gets a laugh, she won't let it go. She runs the joke into the ground.

I only know her from the Schlep thing, so I have no opinion on her. But I do get your "vibe" theory--you just "know" these things sometimes.

I think you and I knew the same crazy bitch, BTW. Only mine lived in Austin. God, I couldn't stand her.

Sis, you must be thinking of someone else. This one looks like Kiefer Sutherland, only with tits.
And I don't let her get away with anything- everyone knows her games by now and just roll their eyes whenever she starts in.

She's tied to Jimmy Kimmel somehow I think. She reminds me of Kimmel's cousin Sal who gleefully torments the unwitting and undeserving for laughs on Kimmel's show. Worst part is I find the guy very funny and someone may well punch his lights out. Goldberg the wrestler gave him stitches in a pillow fight and I thought it seemed fair to me. Sarah on the other hand can't be guy slapped or knocked out or is much less likely to suffer that fate so I find her mildly amusing yet highly toxic in the same way as you described.

BTW, you don't have any blogs that start with "G" in your "daily reads," not that you'd read mine or anything.