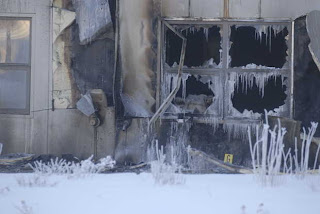 Gee, why would anyone want to torch a church that attracts ultra right wing fundamentalists who devote part of their ministry to curing homosexuals, among other things?
I'm not saying arson is a good thing, especially not to a place of worship.
I'm saying that karma has a way of settling the will of God and delivering strong messages.
Sarah Palin apologized to the members of the Wasilla Holy Roller Bible Church, "for bringing any negative publicity to the church by her affiliation with it."
I have no doubt her apology was in order.
When anyone stomps around, harshly judging everyone whose views differ from their own, they will attract some negativity.
When a church presumes to know a cure for a simple biological predisposition like homosexuality, that's not the word of God, that's the word of fanatics and control freaks who deny science and haughtily think they speak for God.
A million dollar fire will no doubt inconvenience the members of that church. They will have to raise funds to restore it, and I have a hunch it's not a particularly wealthy congregation.
Wouldn't it be amazing if that church's leaders looked to themselves and asked why anyone would want to burn down their church?
What if they examined their tenets and identified which ones would offend someone enough to want to destroy their church?
Wouldn't it be heavenly if they decided to become a more loving, inclusive congregation that truly celebrates the existence of a loving God, rather than condemning God's other children whose only fault is differing from their rigid mindset?
Yeah well, I somehow doubt that'll happen. These are the kind of people whose righteous indignation and sense of entitlement will forever pollute the message of Jesus and his dad.
Karma's a bitch, Wasilla fanatics. Deal with it.
Posted by Karen Zipdrive at 11:59 AM

But if it was an orthodox Jewish synagogue, equally opposed to homosexuality, this would be a hate crime, right?

When any minority is attacked, that's a hate crime. I cannot believe anyone would have to have that clarified for them.
And when Christians are exterminated by the millions like the Jews were, then you can whine about hate crimes.
Sigh. Another anonymous commenter asking stupid questions.

Why is it that every hateful comment on my site is made by someone who needs to be "anonymous?" It must be a bit like wearing a white hood--all safe and cozy in their anonymity.

I know "god" doesn't like it when we feel all happy about any church burning, unless of course it's a synagogue or mosque. We are a very sick nation.

i'm not convinced it was anyone trying to get back at princess sarah. of course, she figures it's all about her, because everything is all about her. for all we know, this was an insurance scam or a few of those std-ridden wasilla teenagers getting knocked up in one of the back rooms and smoking ciggies afterwards. then again, maybe there was a meth lab in the back of the chapel. or it could be voodoo or witchcraft. better get that preacher man back to cast out the demons!

You are taking too much delight in someone else's misery. That shoe throwing insult can only be topped in an islamic country by tossing a pig chip. You laugh at Sarah's Church FIre. You've suggested that Blagojovich be dragged by a pickup. You railed the Mormons for Prop 8 when the Black Vote of 70% is what passed it. Your commemnts during John Edward'es disgrace were ... need I go on?

. . . and you're complaining about trolls?

If you find my opinions so odious, why are you wasting your time on my blog?
If you think your opinions are so righteous, why hide behind anonymity, coward?
A troll is an annoying gasbag who invades other people's space to insert their horse's ass opinions.
This is my blog and I can say whatever I want.
Nobody is forced to read what I write.
For someone who seems to know my opinions so well and disagrees with them, I think you've risen from troll to stalker.
Get the hell out of here and make us both happy, why don't you?

P.S. Stand still, I want to throw a shoeful of pig chips at you before I drag you behind a truck.

Anon you're a dumb ass. 70% of the black vote was not anywhere near enough to get Prop 8 passed, and for you to say that is ignorant and racist. Read the stats you fucking KKK pig.

And then get off your lazy cowardly ass and do some reading and you'll learn how much time and how many hundreds of million of dollars the Mormon's and KC and other religious nuts outside of California donated to pass Prop 8.

And by the way, I think nonnie was exactly right about the insurance scam angle. Something tells me that church will be replaced with a palace far more opulent and befitting their hate mongering princess Palin.

Yeah, but I hate to see them offered the opportunity for Victimhood. You know--they crucified Our Savior, and now they are crucifying Us.