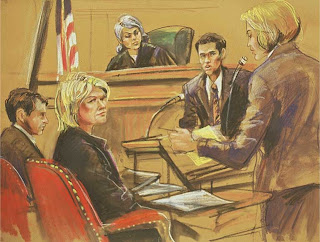 This has not been my day.
I went to get a haircut and the cutter was late so I wasted 45 minutes waiting and ended up leaving in a huff. Then I stopped to get a taco and some little shit of a kid kept running by and crashing into me. I got home and found a jury duty summons in my mailbox.
Oh no.
Now I gotta drag myself downtown at 8 a.m. on Dec. 2, find parking and head into the courthouse with the rest of the unwashed cattle.
After sitting around for three hours in a cramped room full of coughing people, I'll have to sit in some crappy courtroom for voir dire.
The lawyers will ask some basic questions and start smiling at me because I can speak and understand English.
Then I'll have to pull a stunt to get excused.
Last time, I stood up during voir dire and said I thought the plaintiff's lawyer was disrespectful to the court because he was wearing cowboy boots with a suit.
I went on to say this was a courtroom, not a rodeo and that cowboy boots should be worn with blue jeans or not at all. The whole courtroom started laughing, so I really started to lay it on thick, saying there was no way I could be impartial when I'd already decided the plaintiff's attorney was a hick whose politics were probably like Rush Limbaugh's, whom I hated.
Even the judge started laughing as he released me.
I make a terrible juror because I see things in black and white and I'm biased as hell.
If it's a man against a woman, I'll vote in favor of the woman.
If it's old versus young, I'll side with the geezer.
If it's a pot possession case, I'll hang the jury with my not guilty stand.
If one party looks Republican, I'll side with whoever they are against.
If both parties look Republican, I'll tell that to the judge and get excused.
If it's a civil case I'll die of boredom.
If it's a criminal case I'll assume the perp is guilty, unless it's a cute woman then I'll assume she's innocent.
If it's a sex crime I'll poison the jury with fast talk to find him guilty.
There's nothing about me any judge wants on a jury. Now I just have to go through the hassle of proving it. Again.
Posted by Karen Zipdrive at 2:44 PM

The only time I ever got picked for jury duty was when I lived in D.C. I was an alternate and had to sit through the entire trial, and unlike one of the jurors, I actually stayed awake. So I was surprised but I was actually annoyed that I was dismissed and that juror went on to decide the case.

but you would make a great juror on Law and Order

The one time I actually got stuck on a jury was a child custody case. The father was a religious fanatic and his lawyer kept acting like making his little daughters attend church 7 days a week was a good thing. I started rolling my eyes and snorting with derision so much the bailiff gave me a little lecture and the guy's lawyer wanted me thrown off the jury.
HA!
Take a wild guess who got to keep the kids.
Hint: I was the foreperson.

i served on 2 juries. the first case was 14 months long in federal court. i could write a book on that one. the second was a dui that took a few hours in circuit court. i did that one with my eyes closed and both hands tied behind my back. the judge and the prosecutor asked me to stay when the case was over. i thought they were trumping up charges against me, because i was the foreperson, and we found the little shit (who we knew was guilty, but it was the cop's first bust, and he screwed up big time) not guilty. instead, they wanted to hear all about the federal trial.

The one time I served was on a criminal case with a kid charged with having a beer party busted by the cops. He was dead to rights guilty but one asshole hung the jury. I was the foreperson and the youngest on the jury by a good 20 years. I liked it and would do it again.
But, to each his own. Plus, it got me out of work for a week and I was all happy with that!

Easiest, quickest way to get out of a trial: tell them during voir dire that you are an atheist, so will not swear on a bible. It's just "off" enough that no one wants to touch you. Works every time.

I actually like jury when I have a job I get to stay away from. But when I'm self employed, the $6 a day they pay doesn't even take care of downtown parking.