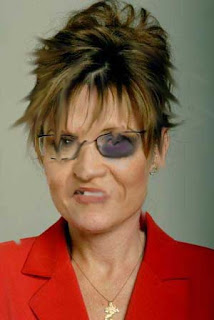 There is literally no channel on TV that isn't talking incessantly about this white trash liar and her book full of trailer park yammering.
Her remarks about her teen daughter getting knocked up are the worst. She acts as if the media got her pregnant, and that the topic should have been totally off limits.
What is with these rightwing, faux Christian broads?
If they are so obsessed with privacy, why do they stick their faces in any camera lens they see?
Do Americans truly believe that women like Sarah Palin and disgraced beauty queen Carrie Prejean have strong moral values?
Do they believe Palin has a right to be indignant about adverse publicity when she's made herself such a huge target?
Has anyone compared and contrasted her grandbaby daddy Levi Johnston's statements versus hers? He sounds steady and resolute. She sounds shrill and panicky.
It matters not to Palin that her book has proven to be filled with lies and exaggeration. She doesn't believe in the Associated Press or its fact checkers; they are just an inconvenience to her delusional personality.
What kills me is the small percentage of Americans who buy her crap.
Are they really so ignorant they can't see the hypocrisy?
Are they too stupid to get that her "family values" don't include paying enough attention to her teen daughter to see she didn't get knocked up at age 16?
Do they think it's a Christian thing to do when she ran back to Wasilla with luggage stuffed with clothing that didn't belong to her?
Do people think it's politically wise to trash the campaign staff of the man who dragged her out of obscurity and into the national spotlight?
Here's the thing.
The conservative Republicans refuse to fund education because they prefer their base stay ignorant and afraid. They cultivate an electorate filled with dimwits because it's easier to lie to them and feed them bullshit about Jesus, the American flag, guns and war.
Unless one is a very wealthy person who loves the tax breaks and other big business perks the GOP loves to hand out, then one is just plain ignorant to belong to that party.
Sarah Palin is the worst of the worst kind of politician.
She's ignorant, deceitful, arrogant, ineducable, delusional and conceited.
And anyone who buys her piece of shit book is an unabashed idiot.
Posted by Karen Zipdrive at 10:39 PM

Email ThisBlogThis!Share to TwitterShare to FacebookShare to Pinterest
Labels: Sarah Palin is an absolute asshole.

i can tget beyond the picture LOL -- i cannot stop laughing

what really pisses me off are women like oprah and baba wawa giving this bitch any credibility whatsoever. they allow her to lie over and over again, and they never call her on it. they're more concerned about their fucking ratings than getting the truth out about his moron. oprah will use the excuse that she's not a journalist. however, she sure got pissy when an author lied to her. i guess it's okay if people lie on her show when she needs a boost in the ratings. on the other hand, what excuse does baba wawa have? she's still calls herself a journalist, doesn't she?

I don;t know what the hell oprah was thinking, but Walters, in her way actually brought out the idiot.... asking Palin what of the Israeli situation, Palin says Israel should be building on the Palestinian west bank.
WHOAH!!!! Palin tied the knot in her own noose there. I think she also looked like an idiot when she said she had no idea her daughter was sexually active. Hell they had all the time in the world to do it in each of the 26 rooms in the Governor's mansion while Momma was on the campaign trail & papa was doing the drill baby drill routine.

Why Palin get free advertising of her book is beyond me. She is an idiot.
If she runs for Pres in 2012, we are all going to have to register as rethuglicans to make sure she never gets past the primary election.

Fran, are you kidding? I'd LOVE for Palin to be the Repukelican nominee for 2012.
Hell, Jimmy Carter -or- Michael Dukakis could kick her ass. Even John Kerry could win by a landslide with that bitch on the other side.

Ours is an envionment where evil is perceived to be rewarded while good is punished. As with everything the Gods have a reason for creating this perception::::
People who fall on the good side of the good/evil scale have more favor, and when they do something wrong the Gods punish them BECAUSE THEY WANT THEM TO LEARN. The Gods want them to receive this feedback in hope they make corrections and begin to behave appropriately. The Gods DON'T like evil and refuse to grant this feedback.
EVERYBODY pays for what they do wrong, only evil people must wait until their next life before they will experience the wrath of the Gods, manifested in their reincarnation as a lower form of life into environments with increased/enhanced temptations.
Sadly, this allows the Gods to position this perception of evil rewarded as temptation, one which they use as an EXTREMELY effective corruptor.

Both Africa and the Medittereanean are regions which have sexual issues. This is a sign of morbid disfavor once you understand that females are the God's favored gender. Muhammad's (Mohammed's) polygamy halfway through his life as a prophet was preditory. Now a huge percentage of Muslims believes in male superiority and that the abuse of women is God's will. Female genital mutilation is still practiced in Africa. Black misogyny is the most eggregious example in the recent past.
Black member size is temptation to a predisposed population.
The patriarchal cancer spread throughout Europe because of Christianity, of which the majority of policy makers were Italian men. Expect the largest landowner in Europe and the continent's original superpower also played a major role in African slavery.

Militancy in Africa is consistant with the Iraqi example, as was slavery and the KKK here in America:::Fear enforces proper behavior. Without it we see what happens as a result of gross/morbid disfavor:::::AIDS, crack babies, dead young men in gangland retaliation killings. This is the purpose behind many black's historical tendancy towards resistance.
The same principle was true in Europe and throughout the world for centuries:::People whom lived under iron fists were conditioned to think the right way. As a result they experienced higher numbers of children ascend into heaven because they were taught to think and behave appropriately, which they passed on to their children. Our preditory envionment of "freedom" was the primary purpose the Gods had when implimenting this strategy that is the United States, one which they used to spred the cancer of democracy and westernization throughout the world. And the Gods use this tool that is America to prey on the disfavored both at home and abroad:::Much like the ghetto, America in general experiences a heightened level of temptation due to the people's disfavor.

Even the Old Testiment is not to be taken literally, but the Gods do offer clues throughout to help the disfavored:::The apple is a tool of temptation used to corrupt Adam and Eve and cast them out of the Garden of Eden.
There is another lesson to be learned from this passage, and it is quite similar to the vailing issue and the discourse over women's attire which ultimately died in the 70s:::Women are responsible for and control the fate of mankind.

Think about what I say. Consider what I teach. Society is going to become disturbingly ugly as we approach the Apocalypse due to spiralling, runaway disfavor.
I do not know when this will occurr, but it is the God's way to grant some time before they end on Planet Earth.
Make the decision to always be good and never look back. Until you do this technology will employ tactics to test your resolve:::Ridicule, beligerance, doubt and refusal to abandon what people perceive to be their "investment".
Pray daily. Think appropriately. Too many are confident, unaware of the God's awesome powers or their status as antients. Others may fall prey to their positioning.
Be humbled, God-fearing and beware of the God's temptations, for everyone is tested to evaluate their worthiness.
Search rest