DADT Repeal: It's About Time. 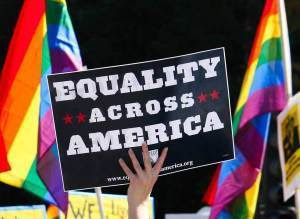 Like some slaves being granted their freedom to leave the plantation, I hope we queers don't start kissing the massas's jackboots with gratitude.
Restoring or creating civil rights for all Americans is an imperative, not a favor or kindness.
If they want to put some teeth into the repeal of Don't Ask/Don't Tell, they could start by rehiring any ousted gays who want to rejoin the military.
They could amend any discharge papers that were less than honorable due to sexual orientation.
The repeal is halfway good- but the life partner of a gay soldier still has no rights as a spouse, and until that changes, we ain't quite there yet.
The good news is, at least a few Republicans voted for the repeal.
Posted by Karen Zipdrive at 10:08 AM

Wasn't Private Benjamin's commanding officer a lesbian? I bet a lot of women in the services are as butch as female gorillas. Which is a big point in their favour.

Lesbians are as common to military service as gay men are to hairdressing.
By the way you spelled "favour" I assume you are possibly Canadian or British, so I will assume the 'butch as gorillas' thing was not meant to be insulting.
But for your edification, I have known lesbian soldiers from both ends of the butch/femme spectrum.
;)

I can't decide which surprises me most, the fact that the R's and D's finally agreed on something, that the agreement was over doing something positive for g&l's, or that Lieberman sponsored the legislation.

This was a positive step in the right direction, but like KZ said, until those who were dishonorably discharged or those who left voluntarily to avoid prosecution are allowed to rejoin with full benefits, it's justice delayed.
Put this with the Dept. of Ag's decision to pay off on the Pigford case and settle with black farmers and you have real progress taking place. Of course, all of that happy shit slams to a halt in January when troglodytes take over the House of Reprehensibles.
The DREAM Act and START Treaty are next, and with any luck we'll get health benefits for first responders passed before the "dumbing down" of Congress commmences full scale.

i can't argue with anything you said, zippy. a lot of wrongs have to be righted, but at least they took the first step.

it's kinda sad that we jump up and down with excitement just because politicians finally did something right. it's like rewarding a kid when he stops hitting someone, when he shouldn't have been hitting anyone in the first place. however, i'll single out kristen gillibrand for fighting for the repeal, as she had never had anything to do with keeping the policy in place.