Light Sabers Are Not Real, Stupid. 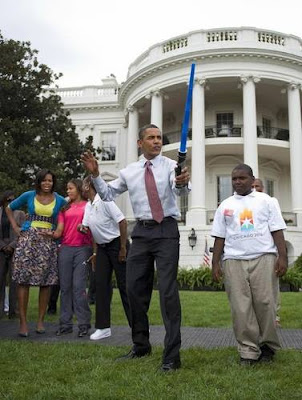 President Pissy totally blew it today with his admonishment to the Democrats because they didn't like watching him take it up the ass by his daddies in the GOP.
I detested George W. Bush, but at least he was loyal to his base and never waivered.
This limp dishrag of a president needs to do the honorable thing, hand the reins over to Joe Biden and go apply for a job as a lecturer at a Southside Chicago Junior College.
Obama is taking the last remaining days of a House & Senate majority and inviting the GOP to start pissing all over them to get an early start.
There is NOTHING Obama can do to restore my faith in him.
Support him?
I don't even LIKE him anymore.

Elizabeth Edwards passed away today shortly after Obama's speech.
I think she heard him, rolled her eyes for the last time, and just let go.
Posted by Karen Zipdrive at 6:38 PM

Email ThisBlogThis!Share to TwitterShare to FacebookShare to Pinterest
Labels: Obama. Lights out.

Okay I'll say it: Obama was a Republican plant and we were all bamboozled. Fool me twice...shame on...me.

Howard Dean and Hillary are the only D's left with balls so let's start working on a plan now to get one or both of them in office.

They all follow the money - there is no two-party system in Washington.

it is so "funny" ( as in funny coincidence) that you would have blogged about it - indeed I was so annoyed by Obama's capitulation that a couple of hours ago I sent you a message regarding the very same subject !

Theo, as much with I disagree with many of your conclusions I intend to let your comment stand because my readers often love a new cat toy to bat around.
But know this.
The fact that your Blog profile is closed to readers tells me you like to talk but are likely not willing to listen.
Welcome to Pulp Friction, on a probationary basis.
And remember, "brevity is the soul of wit."

"Karen", Pleased to meet you! I won't take up much band width from now on, I promise. It is very nice to see at least one lefty who has the "courgae of their posting convictions" to let a possible right-winger post non-offense things and not just delete them out of fear of not being able to anwser them in front of their minions/fans. You get a big thumbs up for no hypocrisy. I look forward to meaningful debate that we can all learn from!!

Well, thank you kindly, Theo, and forgive my obvious suspicion because it's all too rare to encounter a right-winger who can even spell, much less elucidate their POV's.
We are liberals and progressives here, so please consider that with regard to trying to enlighten, educate or change minds to the other side.
I dare say my readers have a stack of curriculum vitae that could choke Sarah Palin and every moose in her state.
And as far as I'm concerned, I may be a registered Democrat, but at heart I am a socialist, and I consider most Republicans full blown fascists.

P.S. That's Howard Dean, M.D. His only major flaw was screaming out a rebel yell. BFD.

How can anyone wonder why our country was desperate for a major change after Bush?

We liked Obama because it was refreshing to have an articulate, well educated adult talk to us instead of an ignorant cheerleader that got through school on daddy's money. Obama was as hopeful and naive as the American public to think that everyone, even the Republicans, would actually participate in allowing a black President to heal and unite this country after the shit pile of mayhem Bush left behind resulting from reprehensible behavior practiced under Bush.

In short the Republicans are a party of haters. And the only people they hate more than gays and lesbians are people of color, particularly blacks (followed by the aged, the sick and the poor). The Republicans have demonstrated in every way possible that they'd rather see our country fall than have a black man succeed as our President.

Theo, I'd like to know who you think would heal and unite this country?

Tea Party? As in Rand Paul who thinks that private businesses shouldn't be forced to obey civil rights laws, and Bachmann who (among many other crazy things) doesn't think Obama is saying "God" enough? Tea Party as in dressing up in Colonial drag and displaying racist posters of the President at rallies? No rational solutions to heal and unite our country just demands to eliminate all taxes and health care for indigents? Mob rule, racism and irrational hair ball ideas is all I see coming out of the Tea Party.

Theo I appreciate your civility and I understand your frustration with our government. But its the 21st Century dude, and there can't be rational discourse with someone I imagine typing by the light of a kerosene lamp, wearing a tri-cornered hat with drum & fife music playing in the background. Thus, I bid ye a fond farewell good sir and give my regards to Paul Revere.

Teabaggers, alas, are the official party of the terminally superstitious, chronically weak and most willing to cooperate with corporate America's desire to make America a fascist nation.
Any group stupid enough to select a name that refers to ones testicles dangling into one's open mouth, well, 'nuff said.

'Kill Bush' posters?
Are you fucking kidding me? With his jack-booted cadre of goons and his ticket-only rallys, who would dare express that kind of first amendment right?
Talk out of any orifice you like, but there were no KILL BUSH posters, burning in effigies etc. anywhere in public, unless he was thousands of miles away getting drunk somewhere.
Remember, I'm a Texan who endured two terms of the little dictator as Governor. He tolerated no public outbursts against him. NONE.
If you'ge gonna keep popping in, know your history.
You seem to forget that even Cheney was able to shoot a pal in the face in Texas without so much as a police report.
Comparing the teabaggers with their goddamn sidearms at political events and their racist Obama eatin' watermelon pictures to anything we rational Dems did makes you sound like a backwoods Tennessee hick.
You're in a smarter group now, Theo, you gotta step up your rhetoric or you'll stop being any fun.
P.S. Tell your pal Sarah we support SOUTH Korea.

I am a proud liberal Texan and professional journalist.
I had the pleasure of meeting Molly Ivins and she was a hero of mine, and still is.
DO NOT POST LINKS TO MY SITE.
P.S. Don't ask silly questions, they bore me and add nothing to the conversation.
P.P.S. Albert Gore graduated with honors from Harvard University, so the notion that he is backwoods is just stuck on stupid.
Instead of just harping about how inferior our people are, why don't you extol the virtues of those politicians you respect?

Okay, its obvious the Teabaggers can bitch, out blame and find fault better than anyone, you win on that count.

But let's hear one solution the Tea party has offered that would fix the mess in D.C. Don't just conjure up shit or tell us how stupid you think someone is, give us verifiable facts. And don't worry about links, we know how to look things up on The Google.

And while you're at it, I'd like to know exactly what you think the impact would on our country if no one in the US had to pay taxes?

Okay, one more time.
This is my blog for people of like political mind. On rare occasions I allow other political views to opine, assuming they add to the conversation and at least marginally interest my readers.
Thus far, only my sister and I have engaged you, so I must assume you are (A) boring my readers and (B) running my readers off.
Thank you for making your final comment here, but I am done trying to tilt at windmills or quibble about GPA's.
If your blog was not at an intentionally secret location, I'd invite my readers to join you at your site. Alas, it takes balls to say what you want and face comments you may dislike.
No harm, no foul, Theo, but I'm going to have to ask you to leave now and stop commenting. I'm just not interested in your POV, sorry.
Happy holidays.

and as for who the Republicans hate (and that list is very long) - there is no doubt in my mind they hate the poor MORE than anyone else - even the blacks... tho i am sure they will tell you most poor are black