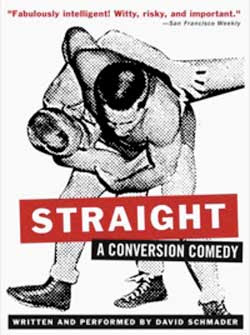 In "Straight, A Conversion Comedy," Playwright and wit David Schmader's one-man show explores the world of conversion therapy for gays and lesbians considering turning straight.
His wit and amazing articulation and perfect diction takes the audience from his happy life as a very frisky gay man through his oddly subversive curiosity about groups (mostly Christian-based) like Exodus, who claim they can turn an ordinary gay man into a woman lovin' straight guy, if only they accept the hoops they must jump through to get there.
In his detailed storytelling, he admits to posing as a straight wanna-be to infiltrate some of these gay-no-more groups, where nelly gay men try to play touch football and big dykes are taught to be more feminine, all for the love of Jesus and the desire to fit into "normal society."
Not so much hilariously funny, the play was witty with a few great zingers thrown in to keep the mostly gay audience engaged.
The San Francisco Weekly describes it as, "Fabulously intelligent, witty, risky and important."
Hyperbole aside, having never met a gay or lesbian seeking conversion to heterosexuality, it was interesting to see what some go through to please Jesus, their parents, or society in general.
Does his curiosity actually succeed in turning him straight, or was his participation just an undercover investigative effort?
Let's just say at the end, he still had plenty of friskiness about him.

Email ThisBlogThis!Share to TwitterShare to FacebookShare to Pinterest
Labels: Straight: A Review

Larry Craig would have to admit he was a big fat homo before "the healing can begin."
Must be hell living with a lie like that and pretending to be such a family man.
GOOD.