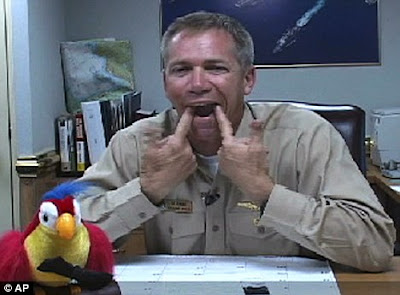 Gee, it's getting so the captain of a gigantic Navy aircraft carrier can no longer get by with making lewd, sexist, homophobic videos to show to his 5,000+ person crew.
You'd think after those other high ranking asses got canned because they gave a candid interview to "Rolling Stone" magazine where they all but said President Obama is a moron, other high ranking military officers might think twice before doing something as stupid as making offensive videos public.
Maybe Capt. Honors can create a new career on the comedy club circuit. Or maybe Fox News will hire him as a military affairs "expert."
At any rate, I'm glad they fired the stupid bastard and took away his fat pension for life.
With the repeal of Don't Ask/Don't Tell, the last thing today's military needs is a homophobic high ranking officer. Especially the Navy.
Even the Village People knew way back in the 1980's about the Navy's reputation for attracting gay seamen.
Don't let the door hit you on the way out, "Honors".
Fuckin' jerk.
Posted by Karen Zipdrive at 10:22 PM

(Sob) It's so unfair! I can only hope that Fox News will rally to his cause and remind us all that free speech is sacred.

Write your [moronic] Congressman today! Get Palin & Bachmann on his bandwagon.

Together we can get this leader of simulated masturbators back to the helm.

can you think of anyone with a more ironic last name?

The military has always been rife with these types of pervs. They've been free to express their perversions with impunity while the gays were summarily tossed out of the service for just being who they were.

I'd like to think this cleanup is a new military trend but its just one little example out of millions so I'll remain content about DADT being abolished.

Military members will always have prejudices--now maybe they'll keep them to themselves and just shut the fuck up.

watching people defend him was almost comical - the worst part was it went on for 4 years before they did anything.......

and we wonder why we cant win wars