Sarah Palin has Rep. Giffords's Blood on Her Hands. 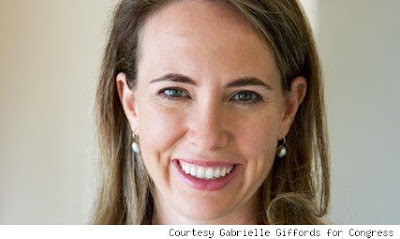 Yes she does, and anyone who says differently is delusional.
Palin and her teabagging pals spit violent vitriol all over the media, and crazy armed people take it too seriously and go out and murder people.
Arizona has laws that allow unregistered nuts to carry concealed weapons.
Arizona has become the Mecca for right-wing nuts with guns.
Rep. Giffords is a Blue Dog Democrat, but idiots on the right don't know blue dogs from blue balls.
Palin needs to be muted. Not by gunshots or violence, but by public demand.
She started this shit, and the blood stains will never wash out.
Of course the shooter in AZ will plead insanity, but anyone smart enough not to talk to the cops until he was lawyered up tells me he's not nuts, he's just a typical mean, right-wing son of a bitch with a sense of entitlement he thinks allows him to shoot total strangers with whom he disagrees.
Arizona used to simply be hot as Hell.
Now it is Hell.
Posted by Karen Zipdrive at 9:35 PM

Email ThisBlogThis!Share to TwitterShare to FacebookShare to Pinterest
Labels: Sarah Palin Has Blood on Her Hands.

i'll just repeat a comment i made over at the raisin:

i thought of palin and angle immediately when i heard of the congresswoman being shot and all those people dying. by the way, here's a picture of gabe zimmerman (he's on the left), the congressional staffer who was among the dead. he was 30 years old. a 9-year-old little girl was murdered. a federal judge, and others. "don't retreat, reload!" "second amendment remedies." i really try to watch my language here, but fuck palin and fuck angle! fuck bachmann for wanting her constituents "armed and dangerous!" fuck their teabaggers followers! fuck charleton heston, who i hope is burning in hell right now. i won't wish anyone dead, because i refuse to be like them, so i will instead wish palin and angle and bachmann lives filled with terror. i hope they're afraid every single moment of their miserable lives. words have consequences. the shooter was probably mentally ill, but that only made him more susceptible to your hateful rhetoric. fuck you, sarah palin, for expressing your condolences. you should never be heard from again, you piece of shit. i have to stop now, because i am so angry. it's time to focus on those who are still living. i wish the injured a full and speedy recovery, and some sense of peace for the families and friends of those who are no longer with them.

Like nonnie said, the sadness, anger and sick feeling makes me want to do anything other than have to think about the evil, soulless parasites who may have given this man some sense of crazy righteousness. To see Palin scrambling around trying to find tweets to delete and pictures to doctor, while feigning outrage at the real implications of nutters "reloading", confirms her to be without morals. The rush to express sympathy and worse, prayers, from all of those whose sole political trick has been to constantly whip up macho posturing in the absence of any reasoned argument, is sick. What good are their prayers to a nine year old who is now dead, by a gun whose ownership is so glorified? The extended guilt for the deaths of innocent people and the pain of so many families should be on their consciences, no matter the spin that is already being planned.

but JUST like the Long Island Railroad shooting and 9/11 - we will NOT learn from this - by wed it will business as usual for Palin and Rush. oh how quick until Rush blames Obama.

the hate is eating this place alive

If Palin didn't feel any responsibility for this senseless act of violence, she shouldn't have rushed to her web site to take down her cross-hairs map where Giffords's district was marked.
Palin is a chicken shit who's too quick to cover her ass when she's cornered.
A pox on her house.

The kid is a hurtin' pup who was already unbalanced and affected by all this lock and load tea bagger lingo to whip him up:

Rhetoric in the wrong brain leads to encounters like these.

He was a grown man who had the wherewithal to buy a Glock and plan the assassination.
Hurtin' pup, my ass.
I refuse to consider his mental status as a mitigating factor in this senseless slaughter. He locked and loaded and shot, just like the teabaggers recommend.
He was their puppet.

22 year olds are highly un-developed people. Your brain isn't truly together till around age 26, and this guy is serving dipshit on another planet.

My hope is that the 75% of Americans who don't have mental/emotional issues will remember that day and get off their complacent asses and do something to stop this crap before it goes any further.

But like d cap I have my doubts that things will change for the better.

In reality I'm afraid this will probably just challenge other nuts to do something horrible that will top this incident. And politicians now have the perfect excuse to remove themselves even further from their constituents.

If I was in office I'd still meet with my constituents, only it would be in a closed room with a metal detector at the door and an armed guard present.
No guns or knives allowed. Period.

The assassin was unemployed but he had the $500 to buy a Glock. Whoever gave him that kind of dough should be indicted as a co-conspirator.
And of course he shaved his head before he was arraigned--it will definitely help with that insanity defense his slimeball defense attorney will definitely plead.
I love what she did for the Unibomber, who's under a jail somewhere braiding his stinky beard.
I'm starting to think the French and their guillotines at Concorde Place had something going with that idea.

Gun sales are up 60% in Arizona on Monday alone.

Here is a look at the reality:
Outside Sportsman's Warehouse, the cavernous store where Loughner purchased his Glock, gun owner Jason Moats said that "the bad guys can get the guns either way." He suggested that the shootings could have been less tragic had there been one more weapon out there, rather than one less.

The whole situation sucks & Palin & that ilk hold a piece of that blame/ responsibility.