Aaron Carter: Total Douchbag or
What I Was Doing on My Bloggy Break 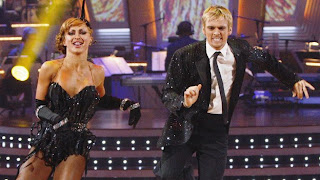 I had to take a blogging breather recently, because I also needed an MSNBC breather. Instead I've been gorging myself on trash TV like Dancing With the Stars, everything on E! and other televised garbage.
On my break I learned one thing: the biggest douchebag on TV has to be Aaron Carter, the pissy little bleached blond bitch on DWtS. He's a terrible sport, he whines like a 9-year-old and the whites of his eyes get crazy like a horse when it looks like he might lose.
He's hilarious when facing the judges. He purses his lips so tight they turn white, like he's reliving some bad flashback with an abusive daddy or something.
He's not a bad dancer per se, he just has a horrible personality.
When he thinks the camera's not on him, he's haughty and snide. Then when he sees the red light, he starts smiling and trying to act like a real sweetie pie.
I'm kind of hoping he gets into the final two, so when he loses his head might explode on national TV.
Have you seen this wuss in action? Snide comments welcome!
Posted by Karen Zipdrive at 5:00 PM

Not a bad dancer? Aaron Carter is an incredible dancer, in fact easily one of the best this season. In fact considering Mya's previous extensive dance experience, Aaron's progress on the show is quite impressive and he may be the BEST on the show. But you are correct, his personality has been off putting to the general public. Kelly Osbourne has whined and cried as much as Aaron now, but our sexist society faults Aaron for what we sympathize with Kelly for. He has ALWAYS been annoying-and he has himself to blame. All it takes is watching the House Of Carters shows that exist on youtube to want to give Nick Carter a prize in patience in not smacking the kid from here to kingdom come.....

oh, zippy, don't even get me started! the show this season ranges from boring to ridiculous.

aaron carter had 4 good dances, and 2 of them were the jive. what gets me is the preferential treatment he and a couple of the others have been getting. remember the production number with the muppets? if they did that for each team, that would be one thing, but they don't, and it's not fair.

i can't believe natalie got voted off. she was wonderful. it's more of a popularity contest than anything else.

aaron and katrina are both whiny little asses. i think the producers made some kind of deal with katrina, because her ex-fiancee was bitching before the season started that she never gets a decent partner. the judges made sure to score aaron high enough so that he'd be saved when he got the fewest public votes.

the judging this year is especially stupid, imho. they are scoring individuals instead of the dances, len especially. he consistently scores mya low and uses the same ridiculous reason over and over. i don't find her dances any more gimmicky than anyone else's, in fact less so. kelly osbourne gets high scores, because carrie ann loves to see how happy she is to be dancing. utter bullshit. her first dance was great, and she's been shitty ever since. joanna has improved, but i don't think she's as good as the judges say she is. i think she depends a lot on her partner to make her look good. i liked mark, and kelly should have gone instead of him. michael was charismatic and he was getting better, but he deserved to go earlier. donny osmond makes me want to puke, even though some of his dances were good (if i hear about showmanship again, i might throw something heavy at the tv), and he isn't half as obnoxious as his sister was.

i hope mya wins, because i think she deserves it, but i know she won't. i predict aaron will be the next to go, then kelly. donny, mya, and joanna will be the final 3, with joanna winning, donny 2nd, and mya 3rd.

Hey, if you're going to gorge yourself on junk tv there's really nothing finer than the new season of The Real Housewives of Orange County.

Call it Schadenfreude Central because these pampered idiotic fake boob/fake eyelash/fake ass/fake hair extension women are having to live in the crappass economy their republican ideology has brung us.

Watch hilarity ensue as at least two of them lose their homes and possibly their Mercedes.

Oh honey, I love all the Housewives series. Those OC bitches are like watching old Barbie dolls get too close to the barbecue grill.
And those Atlanta bitches? Puleeze.

Yeah, I ain't watching MSNBC all day either anymmore. But I was yesterday when the shit hit the fan at Ft Hood.

I have been watching anything I can that is trashy shit. Plenty to choose from eh? ;)

Read, and the quality of life goes up!

since i have to live MSNBC all day -

i would not even fathom one second of DWTS or AI ---

my new favorite - Chopped, Chefs vs City and IMpossible Dinner and of course the Next Iron Chef