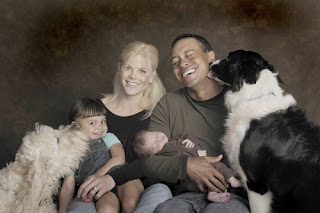 In case you missed Wanda Sykes' hilarious take on Tiger Woods "car accident," I'll tell you my theory since it matches hers to the letter.
1. The National Enquirer ran a story about Tigie steppin' out on the little woman with some bimbo.
2. The missus confronted Tigie and he did what all men do: denied, denied, denied.
3. Unhappy with his equivocating, the missus went Viking on him and started punching him in the chops, giving him a fat lip and drawing some blood.
4. Tigie knew he didn't want to go O.J. on her, so he beat feet out to his Escalade and attempted to get the hell outta there, even though it was after 2 a.m.
5. As he was backing out, the missus ran out and said, "Where the fuck do you think you're going?"
6. Not quick enough on the draw, Tigie paused long enough for the missus to take a 9-iron to the Escalade's back window.
7. Panicking, Tigie hit the gas and ended up hitting a tree and fire hydrant, just at the end of his driveway.
8. As he lay dazed and confused, the wifey ran out to beat him a little more, but at the last minute she thought, "uh oh, big scandal=less sponsorship money," so she wised up and hatched a crappy cover story with her poor, beaten hubby.

No way did she use a 9-iron to free him from the wreckage. Who'd free a trapped Escalade driver by beating out the back window that's a good 8 feet from the driver's seat? Come on, you two.
Tiger probably got caught stepping out, the wife beat on him and he tried to outrun her and freaked out in a panic.
Dodging the police for three days isn't helping any.
He might play great golf, but as a liar he sucks.
Posted by Karen Zipdrive at 7:47 PM

Email ThisBlogThis!Share to TwitterShare to FacebookShare to Pinterest
Labels: Tiger and Elin Woods: Pants on Fire

Yeah, this cover story is some very stinky cheese.

Just goes to show you. Stay away from those hot blooded Scandinavian wimmen. They don't play.

Or you could just keep it in your pants. That what guys in Tiger's situation call "Plan B".

the whole thing is ridiculous. how can you get that injured backing out of your driveway unless something else is going on? here's my scenario. wifey got pissed off inside the house and smacked old tigie upside the head. she got in a few good punches, maybe a 9 iron to the head. dazed and confoozed, tigie gets into the escalade to escape crazy elin, and she runs after it, smacking the back window and breaking it with the same 9 iron. disoriented from the beat down, he hits the hydrant and the tree. she's afraid that the neighbor saw her with the 9 iron, so she concocts a story that she used it to break the window and rescue old tigie. still woozy, he gets out of the car (probably used the damned door, how could they both be damaged if he rear-ended a hydrant and a tree?), and passes out, splat on the road. that makes more sense than the bullshit they're shoveling. his corporate sponsors will make sure that the truth never sees the light of day.

It's all very sexist.
Had she been the one with the busted lip and the Escalade up a tree, you can be sure Tiger would have been questioned up the yin-yang by now.

It's sad that it takes something like this to make golf almost interesting.

I may have almost been able to believe his ridiculous story if he'd crashed up a Buick Enclave instead of a Caddy Escalade. He's a phony and a liar and I can't wait to see his wife's new Kobe ring.

HAHAHA!
The guy's worth $100 mil a year- just on endorsements.
If I was married to him and found out he was cheating, I'd hire the meanest SOB lawyer on Earth and clean him out.
I'd even take half his golf clubs and green blazers.

Dick Cheney is impressed with Tiger's game and wants to go quail hunting with him and W.

Cute pic, but what an asshole. I hope for the wife's sake that this is just overblown nothing. Otherwise--what a fucking bastard he is.

And I'm with you on suing the fuck out of him if it's true!

Woops, another mistress of his has released some hot phone messages and a racy text from Tiger, saying, "I'm gonna wear you out."
Elin should have used one of those giant putters on his stupid ass.