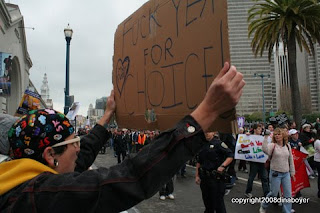 This post might enrage some people out there, but what's life without a little controversy?
I heard heads exploding after Joe the stoop Stupak and a passel of lobbying priests tightened up abortion funding restrictions on the House's version of the health care bill.
Then I checked my own reaction and realized I was rather 'meh' about the news.
Why?
Because we queers fought for legalized abortion before the Roe v. Wade era, and we had zero horses in that race.
My gay sisters and I have all put in time escorting women seeking legal abortions to clinic entrances amidst throngs of angry, violence prone, invective spitting, anti-choice maniacs.
Women born after 1973 never had to sweat getting safe and legal abortions because we older women hit the streets and risked our asses marching for legal abortion. At such marches, I recall the crowds were usually a 50/50 mix of straight women and lesbians.
So here we are.
Breeders can safely abort fetuses without breaking the law.
Yet we queers are still where we were 100 years ago in terms of equal rights.
If you ask the average dyke what Roe v. Wade was about, we could likely explain it in enough detail to be convincing.
If you ask the average straight women of abortion-having age what Stonewall was all about, chances are they'd look at you like you were asking them to explain quantum physics.
Frankly, I'm a little tired of straighties, especially women, doing little to nothing to help gay people get equal rights. Is it enough to just say you're for gay rights?
It might sound crazy, but maybe repealing Roe v. Wade might teach these people what it's like to have something as basic as choice taken away. Maybe they need to learn the value of a good protest march.
Go ahead and comment, telling me you think I've gone off the deep end.
But be sure and tell me what direct actions you've taken to demand equal rights for gays.
I've done my part for abortion rights, and so has virtually every lesbian I know.
I haven't just been pro choice, I've been in the trenches, risking my gay ass.
A little quid pro quo would be nice.
Posted by Karen Zipdrive at 6:07 PM

Email ThisBlogThis!Share to TwitterShare to FacebookShare to Pinterest
Labels: What have you done for us?

You do make a good point here KZD, you do indeed.

This straight woman is more concerned - for good or ill - with LGBT issues than abortion issues.

That might make me a bad person overall, but I think you might be ok with it.

to me, there's no difference between the fight for gay rights and abortion. it's a matter of civil rights and the separation of church and state. i'm so fucking tired of the fundies dictating how the rest of us are supposed to live. if you don't want an abortion, don't have one. if you don't agree with same-sex marriage, don't marry someone of your own gender. it all boils down to basic civil rights and the basic dignity of every human being.

It's quite arresting to realise that I'm young enough not to have had to take direct action. Like the post Roe vs Wade generation in the US, it was done for me, and Civil Partnerships have been in law in the UK for 5 years. No Church has the following or influence to change this over here, and all of the main political parties support it as a matter of policy.

Your logic is sound, Karen. I dont know the political tendencies of Maine, but California? What else can explain Prop 8, other than selfish apathy among its straight, young, liberal population? And I agree, 100%, with nonnie. What level of vindictive, hurtful campaigning by superstitious nutters will the majority (I hope) of fair-minded people tolerate?

I hear ya, sister!

And I've been wondering if there's a bit of the "Bradley Effect" when it comes to voters and equal marriage. The polls in Maine looked quite promising. The majority said they were for equal rights for gays to marry. But when it came time to pull the lever (or mark the ballot, or whatever), it seems some folks thought "Well, sure my gay neighbors are nice and all that, but I don't want all of 'em getting married."

Gee, I was expecting a lot more blowback. Sue J it's nice to see you here, welcome.

gotta say, I stood out on those lines. did that work.

and I agree, I'm pretty pissed about it right now.

Hey, Karen. Your post made me think that perhaps you are right. I didn't do enough when the marriage amendment was up for a vote in '06. I took for granted that blue Wisconsin would not let it pass, and sadly that didn't happen.

Ironically, my problem with the abortion language in this bill is similar to those grave warnings issued by teabaggers about the healthcare bill: it's not about abortion, it's about the government intruding where it doesn't belong. The government doesn't get to mandate a personal decision. And if a woman is using health insurance to get an abortion, I'm going to bet that it is a medically necessary procedure and not an early termination based on choice. A slippery slope that could lead to greater government intrusion into whether it will fund birth control, vasectomies, etc. You may not have a personal concern for birth control, but overpopulation affects us all. and {{{{shudder}}}} someday republicans will be back in charge of the government.

Now, back at ya: As there is a definate shortage of protests for me to attend, what would you recommend I do to help promote civil rights for gays? I would welcome any suggestions you may have.

Jess, that's a very thoughtful question. Thank you for asking.
I can think of a couple of suggestions.
1. Call your legislators, especially when gay issues are facing a vote or are in the news.
Same goes for the media.
2. Write letters to the editor as a straight person who believes in equal rights for all taxpayers.
3. Confront homophobes. If you hear someone making wisecracks or phobic comments, tell them they are no different than people who use words like nigger or retard or raghead.
4. Donate to my new charity, CSFKZ.
By donating to Comfortable Shoes for Karen Zipdrive, your tax non deductable contribution will go toward ensuring my feet are happy and comfy.

I did the marching and protesting in favor of abortion too, and foolishly believed that the underlying goal was to support women's rights in general. I was wrong. There's never been reciprocal support from straight women and now I realize that for the most part straight women don't believe lesbians are entitled to share "their" women's rights.

The health care bill isn't going to make abortions illegal. The collateral damage is that its just not going to pay for abortions. I wish straight women good luck in uniting to protest the loss of financing abortions. But personally I won't be on their protest bandwagon this time.

Health care reform will do the greater good for the greatest number of people - that's the bandwagon I'll be on.

It's really easy to assume that all straight people are for gay equality (on this blog at least) because my readers tend to be progressive and smart.
But the fact is, straight people may not mind if we get equal rights, they just aren't willing to do much about it.
Gen X, Y and Z never had to hit the streets and fight for a damn thing. There's not even a draft anymore.
I'll start caring about abortion again when I see all progressive Americans fighting like hell for gay rights.

Hey, thanks for calling me progressive and, especially, smart. I think you have a good point -- and not just about how smart we all are. As an LGBT-friendly straight girl who lives in Massachusetts, pretty much all my congressional reps and my remaining US senator support gay rights, gay marriage (hells yeah, we're in MA), *and* abortion rights. So who do I write to, and where do I protest? It's hard to get much of a good rally going on around these here parts nowadays ....

Hey, Karen: may not get you those comfie shoes, but I could knit up a pair of righteous socks for you. (Lefteous?)

Thanks for taking my question seriously. Like Shelley, all my reps (with the sole exception of our state's Att'y Gen) are LGBT friendly. Hell, Tammy Baldwin is my congressperson.

I know it's not much, but I would like to say that I am raising two little girls who are constantly puzzled by discrimination. They cannot fathom the idea that people in our country are given less rights thanks only to those they choose to love.

They are beautiful smart antidotes to the idiotic Carrie Prejeans of the world.

You're right KZD. We all should do more to support our gay brothers and sisters. Your suggestions are excellent. You have another straight girl on your side.

Big Sis and I've been discussing this subject for a while now and we both agreed how nice it's been to hear from so many enlightened straight people on this topic.
Many of you live in progressive areas, but with 24/7 news and the Internet, we're all aware of where the most homophobic areas of the country are.
In my case, when I hear of another state as backwards as my own, when I have time I write to their most ignorant politicians and complain. I even like to mention that I plan to send their political opponents a contribution.
If they got a few dozen of those type of letters a day, I have to believe they might worry a bit.
Research says that for every letter a media outlet or politician receives, 1,000 other people feel the same way.
Anyway, thanks to all of you for your encouraging comments.

I think you generalize a bit about us straight folks KZ, which isn't fair. I know I have worn through plenty of shoe leather for gay rights. Maybe it's because here in Cali, it's the biggest human rights cause we have going and has been for decades.

Abortion isn't really just a straight woman's issue either. If you were raped by some sick fuckwit, you sure as hell wouldn't want to have his kid now would ya?

Dusty, back when I had a uterus I had more than paid my dues for legalized abortion.
And I was *almost* raped at gunpoint at age 25 but I got so mad I punched the son of a bitch and he ran off.
So your argument has merit, but not in my case. ;)

But I was speaking in general terms..like you are about hetero's. ;)

I get your frustration Karen. I think it is even warranted on a certain level. Thankfully, the decades of activism by the LBGT community has done a lot to educate hetero's about LGBT civil rights issues.