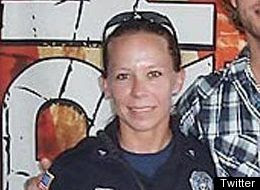 Yesterday's horrible shooting spree at Fort Hood could have been a lot worse if not for the colossal courage of the Fort Hood Police Department's Sgt. Kimberly Munley.
The civilian cop faced the crazed Maj. Nidal Malik Hasan and blasted him in the torso, bringing him down.
Munley was shot in the thighs and wrist in the gunfire exchange.
While this horrible attack has further marred the reputation of Muslims in America, especially those serving in the armed forces, it's done a lot to bolster the reputation of female police officers everywhere.
I think Sgt. Munley should be honored with the highest award the federal government has to offer. She showed more guts than most of us could ever hope to have.
As for Hasan, once again he proved that the military fails to pay attention to mentally unbalanced soldiers. It's hard to believe a man this insane was offering psychiatric care to our troops.
Posted by Karen Zipdrive at 3:06 PM

Bless that woman. I hope all her prayers are answered and the rest of her life goes as she wishes.

the gun nuts should be along any moment to say how this wouldn't have happened if everyone had been walking around armed. of course, they'll have to be very loud to drown out the bigots who will blame all muslims.

War sucks & the military is surprised after people are brainwashed & literally trained to kill, go into rampages. Honestly, I am surprised MORE soldiers do not go off the deep end.
But military suicides are at an all time high.
The one thing that seems to trigger them the worst is a scheduled deployment to the middle east.
I want to know more about this shooter.... how many tours of duty had he already done.
Also I saw an article today that said some of the gunshot injuries were from "friendly fire"...
so others had guns.

I thought it strange the military made no official statements yesterday. Were they busy getting their story straight?

There is more to this story than we know.

Weighing in on what nonnie and fran said, you know you usually hear pro gun people say that if everyone was allowed concealed carry we wouldn't have these tragedies. This case says, uh no.

While I appreciated that a national Muslim group immediately voiced outrage over the shooting, I wonder when the last time was that a Christian spokesperson felt compelled to apologize for Christian shooters.

She is indeed a heroic person. I'm afraid that we're going to need many more like her when more people crack like that fellow who did the shooting cracked.

Thanks for posting this Karen, what you say is so true. She is courageous.

but the nuts on Fox are already going after the Muslims

like Jess said -= when do we have a christian or jew apologizing for their rampages.