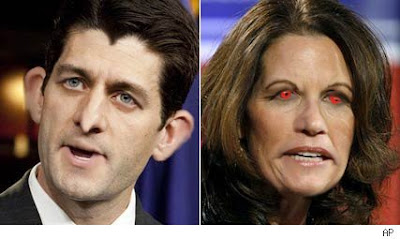 Like Paul Debbie Downer Ryan (R-WI)wasn't enough to rebut the President's State of the Union Address, rabid teabagger and agitator Michelle Batshit Bachmann (R-MN) put on her own dog and pony show, courtesy of CNN.
In fact, CNN hyped her up like she was an officially designated GOP spokewitch by running her screed right after Big Ears Ryan droned.
What, the GOP is in such disarray with the teabaggers on board that they have to have two mopes speaking?
I confess, I didn't listen to Bachmann's remarks because I prefer my fiction in book form. But I did hear Paul Ryan's speech, and apparently he thinks it's too late to do anything anyway because our best century is behind us.
The GOP has forgotten that Clinton left a surplus, Bush 43 spent all of it, then ran us to the brink of bankruptcy.
They call the bailouts a terrible error, but they haven't noticed that Wall Street is rallying, the economy is healing and banks are starting to pay back the money Obama loaned them.
I liked the president's speech, but he used some pretty slick terms regarding Social Security and Medicare and I hope that doesn't mean he intends to mess with either of them. If he does he's toast.
But compared to Debbie Downer and Batshit Bachmann, Barack Obama is a brilliant orator with dazzling rhetoric.
If Ryan and Bachmann are the best the GOP's got, we Democrats are in good shape.
Posted by Karen Zipdrive at 7:39 AM

Email ThisBlogThis!Share to TwitterShare to FacebookShare to Pinterest
Labels: Big Ears and Batshit

I didn't listen to any of the bullshit but CNN is dead to me for letting these two morons speak.

It's true if these 2 are the GOP & tea party's finest they are in deep shit.

Still< a friend put it best...

What Universe does Obama inhabit? I'd like to gothere - where coal and nuclear are "clean energy" - where a 55 year old
woman goes back to school for a "new career" - yeah, lots of employers
lining up to hire her, I'm sure. Where we have 'withdrawn our troops" from
Iraq (pay no attention to those 100,000 mercenaries with trigger fingers
still there). The world "admires" what we stand for - just ignore
Guantanamo. Our future "requires our attention" to education - ignore the
dozens of schools being closed in every state. "We need" to focus on
colleges and universities - just be sure to be very wealthy so your
children can get there.

And didn't you just love his demand to allow military recruiters at all
schools? I also loved his call to lower taxes for corporations. Yes, their
record profits make them very needy for help.

So the speech was positive & hopeful & shiny, but it is not aligning w reality.

Fran I don't recall him talking about clean energy in terms of coal or nuclear...at least not last night. He did mention ending subsidies for oil companies though, and I liked that.

He mentioned them in the same breath, "renewable energy; clean coal and nuclear energy"

don't be too hard on cnn. at least they resisted the urge to hire little chrissie o'donnell as an analyst who could parse batshit bachmann's speech until it was even more senseless than it already was.

I was hoping for another round with Boooby Jindal!