Call Me Heartless, But... 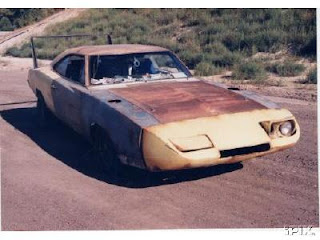 I have owned exactly one American car in my lifetime. It was a brand new 1971 Ford Pinto my dad got me when I was a senior in high school.
By my second year of college, it was a beat up piece of crap with a bad engine and parts (like the headlights) that fell off at will. The mechanic advised me to get rid of it that week, if not sooner. I did, and I've never bought American since then.

Now comes the U.S. auto industry, whining about going bankrupt and wanting the taxpayers to bail them out.
Gee, it's such a coincidence that poorly made cars and huge, gas guzzling trucks and SUV's aren't selling so well these days.
Who wouldn't prefer a plastic and tin foil Dodge Neon over a Toyota Corolla? Duh.
Nah, the U.S. Auto Industry has had decades to bring up the level of American-produced autos to Japanese and European standards. They haven't because of what? Greed? Laziness? Poor management? All the above?
When you can explain to me why Honda and Toyota can have their autos built on American soil and maintain their standards, yet GM, Chrysler and Ford cannot, then I'll get behind bailing them out.
Yeah, yeah, the collapse of the big three will destroy towns like Detroit, right? Anyone been to Detroit lately? They have a 75% school dropout rate and other signs of total demise.
You want to save jobs without bailing out shitty American car companies?
Fine.
Let the Big Three go belly up and sell their plants to Toyota, Honda and Nissan. Hire and retrain American auto workers to their higher production standards.
End of story.
Posted by Karen Zipdrive at 8:54 PM

I think US automakers should get bailed out- by big oil.
Think about it, Exxon, Chevron, Mobile & Shell have had the largest profit in HISTORY the last few years. Fat City!
In part their profits rely upon US drivers. And they have huge loopholes in royalties they should be paying the US as well as all kinds of gvmnt assistance programs, they obviously don;t need.
Tap into that money to help the lame US auto industry get their act together. GM can simply bring back the EV1-- the electric car so many people loved, and get their act together w hybrids, and some decent energy efficiency.

It is bullshit private industry is begging for $$ from the guvmnt. The guvmnt is not going to bail out the Mom & Pop shops, and if they would have paid attention to the economy, people might have jobs so they could buy vehicles, and yes they need to learn from Toyota & Honda as they are clearly doing something right.

Fran, letting the oil industry bail out the auto industry is a brilliant idea.

I second the brilliant idea comment. Someone needs to call that one in to Larry King or something.

The education system is a mess. And worse yet, the people who want to "fix" it are making it worse, for the most part.

We really have to start at the beginning and figure out who needs to learn what.

As for the automakers, some are making better products than they used to, but public sentiment often lags reality.

I could not agree more. I was just telling Sparky that we should let the Japanese car companies buy the US ones and then they might make a car worth driving.

One in ten American jobs are tied to the auto industry.

If we let the automakers fail, we as taxpayers, will be supporting all those unemployed americans...millions of them, via unemployment payments and welfare.

We can either bailout out the automakers or financially support their employees and those who get laid off in the other industries that are tied to the automakers.

Guess you folks made your choice.

I would rather see lots of demands tied to the bailout...higher cafe standards,less gas guzzzlers produced, higher percentage of hybrids and alternative vehicles produced as well as the unions forcing the employees to take hefty paycuts in order to retain their jobs.

I would rather bailout the manufacturing companies that actually make something than the fucking banks and investment houses we have sunk two trillion into already.

That pic looks like a 60's pontiac of some sort.

I've had 2 American-made pieces o' crap and now have a Nissan Sentra which I adore. Yep. I hears ya re: 'Murkin car makers.

I too like Fran's brilliant suggestion. Because if all those jobs are lost we all suffer, even though the car co's made abysmal and even assinine decisions in the past 20 years. Ford even promised to make a hybrid in 10 years (some years ago) then reneged.

I'm ambivalent. Too many Michael Moore movies, too many sad shots of Flint.

What bothers me most is the executives who mess up business after business, move from corporation to corporation to garner bigger and bigger CEO packages, whether they have made a good impact or not.

Then back to all that sad Moore footage.

Don't get me started. I'm riding mostly with Dusty on this one, but would add that the first thing that has to go are ALL the GM execs from that greedy bastard CEO Rick Wagoner on down, and no fucking golden parachutes. They can rot in hell with their beloved Hummers and Suburbans.

And the gov needs to demand that only cars that are clean, quality vehicles can be made. Why the hell can't we make (or at least sell) great little cars like the FORD Fiesta ECOnetic (65mpg, 5-seater) in the US? Half the world drives clean diesel vehicles, but no, not the US! The mini-Cooper diesel (60mpg) is another example and I could go on.

And finally, why can't GM get in line and file bankruptcy like all the poor schmucks whose lives GM ruined? GM consciously chose to make gas guzzlers, so let them sink in the tangle of bankruptcy courts as a consequence.

And why isn't anyone yelling "SOCIALISM" about the gov proposal to buy GM?

I'm very sad about the Michiganders too. If I was Queen I'd take the bailout $$ and give it directly to the auto workers being laid off. Its about $70k each, they can learn a new trade, move to Toronto, piss it off, who cares as long as Wagoner and his bunch don't get a penny of it.

You shouldn't have gotten me started.

my pinto was bright red! i worked every summer and after school and bought it for cash!

I have owned one vehicle that was Japanese..a pickup. It was nice-gas mileage-wise but cost me an arm and a leg in repairs.

I have owned over a dozen American-made vehicles in my lifetime..and I got over 100K worth of miles out of all of them..the most recent being two Ford Taurus's. Both of those went over 150K in mileage and the second one is being driven by the ball and chain as we speak.

My new car is a GM Grand Am. I like it alot..great handling, good gas mileage and a nice service contract from the manufacturer for gratis.

If you take care of your vehicle, it will last you a long time usually..at least MY experience shows that. For everyone bitching about American-made vehicles...when is the last time you owned one?

I refuse to believe the US put a man on the moon and can't come up with better gas mileage, or no gas needed at all. If they want to survive, US auto manufacturers need to get up out of the beds of the oil pigs and become independent.

The American auto companies should be *LEADING* the world in green cars. They haven't even tried to engineer anything worthwhile. Semi-fuel efficient SUV's? Who the F' wants a fuel efficient monster truck? IDIOTS.

The CEO's deserve to eat failure in a big way, but not the worker bees on the assembly line.

If these companies are going to survive, they need to start making SMALL, and FULLY electric cars - NOW. With or without government help.

I wrote a good plan about this and e-mailed it to a few important people. But politicians don't really care what happens to Detroit.

I agree Bigsis that the US automakers need to retool and manufacture less luxury cars and more efficient vehicles for the masses.

That wouldn't be too much to ask from them since they are standing there begging like a homeless person right now.

Mileage is dependent on how you drive. My Grand Am gets 28-30 mpg on the highway..if someone else is driving.

If we do bail them out, there needs to be more strings attached than a pair of cutoffs that have been washed 500 times.
These no condition bail outs are insane.

How dare Rick Wagoner get on YouTube and beg us to contact our congressmen to bail him out. I'll contact my legislators right now and tell them the CEO and his money grubbing stooges have to go immediately.

In 2006 when he KNEW things were going sour, Wagoner's big idea was to subsidize the cost of gas for buyers of one of his gas guzzling tanks like the Tahoe and Hummer. GM offered gas credit cards to anyone who bought a GM tank and the buyer would only have to pay $1.99 a gallon for gas for a year. How fucking self serving is that?

I think the auto bailout should START with the condition that all the Big Three CEOs and top officers be sacked.
Then they should tie top salaries into a percentage of the lowest paid employees, i.e. if the lowest paid guy makes $15 an hour, the new CEO cannot make more than 10x that amount.
Take it or leave it.