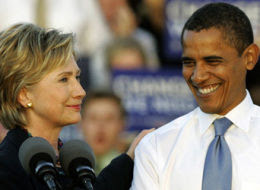 For Christ's sake media, we know you're bored but must you create drama where none exists?
All this prattle about Hillary bringing drama into the no drama Obama camp is bullshit.
The sexist media has portrayed Hillary as the ultimate Alpha Dog, but if they'd just pause and consider the facts, they'd have to reconsider.
Does anyone here think Bill Clinton was the Beta Dog when he was president? Hell, he got caught cheating like a lowlife scumbag and Hillary stayed with him.
As a freshman senator, we all know Hillary won the respect of members on both sides of the aisle by being humble, asking questions and working very hard for her constituents.
Obama is a total Alpha Dog.
So Alpha is he, he's secure enough in his leadership he was able to hire Hillary without any threat to his Alphaness.
You recall the primaries, where he stomped the mighty Clinton machine into the dust?
Good, that helps illustrate my point.
Sure the Clintons have created their share of drama in the past, but when you think about it, Bill was the true creator, not Hillary.
The media needs to wake up and find some real news.
Rather than admitting Obama made an excellent choice for Secretary of State, all this so-called drama about Hillary is media-created and divisive.
Don't fall for that crap.
Posted by Karen Zipdrive at 6:40 AM

Email ThisBlogThis!Share to TwitterShare to FacebookShare to Pinterest
Labels: Still No Drama

The media isn't interested in news. They want process. Lulu and you are right - must seek out the conflict or create one, if necessary.

the media are like mother-in-laws trying to find fault where there is none. what drama has there been about the clintons that the media did not invent? fucking idiots are just too lazy to investigate real news, so they report shit about stuff that doesn't matter.

Great points here, Zip. But the other commenters are right--it's no longer "news" we're watching; it's "nooz." And that don't want you to "snooz" so they make shit up.

Absolutely right. I think Obama and Hillary Clinton have a good rapport, they understand each other, and they agree to disagree on some minor (stress, minor) issues of policy. But to your point, Obama is the alpha, and Hillary will be executing his vision with her own excellent skills. I think it's a great team.

I am also getting sick of the non-story stories. Once I hear more than one "pundit" say it, I know it's the b.s. talking point of the day that's been handed out to everyone to use (esp. at FauxNoise). This one has already been overused and lame.

sitting in the center of all this - you couldnt be more right -- they are creating the soap opera......

hillary will be an excellent secy of state....