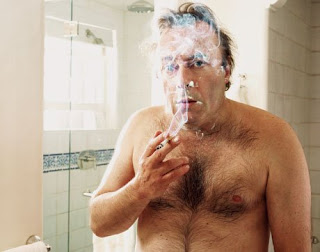 I keep forgetting how much I loathe the terminally stuffy, arrogant, so-called "intellectual" pundit/gasbag that is Christopher Hitchens.
Then I see him on TV or read some pithy article he's written and I am reminded just how much of a prick I think he is.
I don't just randomly pick people to dislike; they have to earn it, and Hitchens has.
He's one of those guys who always seems to argue the opposite side just to get attention. He used to be a liberal, then a conservative, now he's all over the map. I think he's just a sour guy who'd rather argue than breathe.
Here are some of his infamous quotes:
On Barack Obama: in September he referred to Obama as "vapid, hesitant and gutless" and "a dusky Dukakis."
He actually supported Obama, yet he said that?
On Bill Clinton, he referred to him as "a rapist and a liar."
He's good buddies with Paul Wolfowitz and Ahmed Chilabi.
He supported George W. Bush in the 2004 election.
He's written articles dogging (among others) Mother Teresa, Michael Moore, Ambassador Joe Wilson and Cindy Sheehan.
His statements about Hillary Clinton have been so damning and outrageous, I'm surprised she hasn't sued him for slander and libel.
I realize a lot of well-educated, expatriate Brits have issues with alcoholism and misogyny like Hitchens and Andrew Sullivan, but why do they have to come to America and peddle their flip flopping, mushy brained thoughts and philosophies?
Who gives a shit what an old, frumpy drunk Englishman thinks?
I say we should get him liquored up, tie him up (he'd probably love that) put him on a plane back to England and let them keep him.
Posted by Karen Zipdrive at 6:52 PM

I really loathe him.

Yeah.
It's one thing to express his opinion but he always has to add such gratuitous nastiness to it.
He's just so above it all, isn't he?
Ruch Limbaugh just loves him, too. Considers him his hero.

Agree with him or not, his writing is a joy to read. He had an article in Slate a few days ago where he warned that

"Those who think that they have just voted to legalize Utopia... are preparing for a disillusionment that I very much doubt they will blame on themselves."

I'm not so impressed with legalize utopia m'self...

And why does anyone seek his opinion on anything? Who cares what he thinks?

Legalize utopia?
Yeah, that's him. Give him any topic, no matter how hopeful and he'll find a way to lift his leg and piss on it.
Perhaps he can return to England and endure the royal family instead.

I think we should work on legalizing legality.

Legalize utopia sounds so witty, doesn't it? What's the real thinking behind it? Are far left types going to be disillusioned by an Obama presidency? They could be, but those of us who paid attention know that the "most liberal senator" canard is one the right pulls out every single time.

The far right, on the other hand, is going to find themselves seriously off the mark on Obama. When their fantasies of socialism gloom and doom upon which they are already hosting fundraisers turn out to be false, I seriously doubt they'll blame themselves. Let me restate that: now that their fantasies of world hegemony and unlimited free market (Hitchen's dreams) have crashed we've already seen that they won't blame themselves.

I guess he came to the US to feel superior to us colonists. In England he's just another dogmatic wind bag. To me he's a typical slob alcoholic who looks like he lives under a bridge.

Just to prove what a hater he is, this is how he described Princess Diana and Mother Theresa:

"a simpering Bambi narcissist and a thieving fanatical Albanian dwarf"

The perfect Republican with a boozed up British accent. Go home Limey!

i saw the asswipe on hardball, and i don't think i have ever said fuck you that many times in succession. it's one thing to be a contrarian, it's quite another just to make shit up and state it as fact. as for his 'legalizing utopia,' i think he thinks up cute little phrases and then makes up shit to fit around hit. he adjusts his thinking to his cute little phrases. that's easier than actually thinking. he's a lazy moronic drunk. if he didn't have an english accent, he would not be on american tv.

Hi Karen,
Firstly, love your blog!
Secondly, I am a Brit and I think he's a twat for the exact reasons you mentioned. He purposely says things that are outrageous and offensive just to get attention and prop up his own massive ego. I don't have a problem with anyone saying controversial things per se, but this man has no respect for anything other than the sound of his own voice.
I would argue that he has a very small penis indeed.
Much love, Steph.

Oh, and please don't send him back,
Steph.

I must not be watching the right cartoon network - don't know who this guy is ...

I've heard of Hardball but never watched. I also skip all the neo-nazi talk jocks - Rush and his type ... why bother?

From the comments it's easy to conclude he's a prick - so why read or watch this guy?

Although he did have a lucid interval when he wrote in the Slate that Palin is a "...deceiving and unscrupulous woman utterly unversed in any of the needful political discourses but easily trained to utter preposterous lies and to appeal to the basest element of her audience." He went on to say how tragic McCain is and that even though he's not a great choice, at least Obama offers voters some possibility of hope.

Not good enough to listen to his drunken blathering on tv, but maybe somewhere inside there once was a decent person.

I rather enjoy reading him, even when I disagree with everything he says. And good news for our friends in the UK, Hitchens became a United States citizen on the steps of the Jefferson Memorial, on his fifty-eighth birthday, April 13, 2007. We can't send him back.

I love his atheist arguments,just wish he could actually present them w/out being a complete and utter asshole.

Alas, that's what he is.

Steph's comments cracked me up.

Hitchens is a drunken, bitter blowhard who is intelligent but thinks way too much of himself, and ruins the delivery of any good ideas he may have.

Plus I agree, he's a misogynist jerk just like A. Sullivan.

hitchens is good for a beer game -- every time he opens his mouth -- take a gulp -- by the time the idiot finishes - you are so drunk, it doesnt matter