A Couple of Things About President Obama 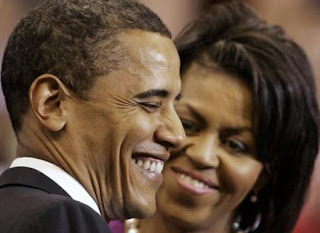 First of all, let's forget about calling him "President-elect Obama." He's already more presidential than his predecessor ever dreamed of being, and I think he deserves the honorarium now, not in late January.
Second, I watch MSNBC or CNN for several hours per day and I've heard too many right-wing GOP meat puppet/pundits opine about "...how Obama had better play to the center or even the right center in his opening act as president if he expects to blah, blah, blah..."
Oh yeah?
What do those yammering windbags know? Do you think four years ago they were on TV cautioning Bush not to play too far to the right-wing, fundamentalist wingnuts? I think not.
As much as I watched Bush like a hawk for the last eight years, I can't really name off-hand what he did the first year of his first term. I know it was bad, I just can't name anything specific he did that first year.
President Obama should do whatever the hell he wants in year one of his presidency.
Unlike Bush, he actually has a lot of political capital he should spend freely in his first year.
The right-wing pundits will vilify him for every minuscule misstep they perceive anyway, so why should he concern himself with what those partisan naysayers think? The majority of Americans trust his patriotism, his intellect and his decisiveness, so I think he should shoot for the stars from day one.
He's getting off to a great start from what I hear. He's planning to review every one of Bush's executive orders and trash the stupid ones (which will likely be most of them).
Anyone object to that? I didn't think so.

Today on NPR I heard a segment about noted racist David Duke discussing his "European American Unity and Rights Conference" (Heil Hitler!) held on Nov. 7-9 in Memphis.
His quotes about President Obama were too ignorant to repeat here, but suffice it to say his racism has definitely been inflamed by having a Black man in the White House, doing something other than cleaning it.
Let's take a recent look at David Duke: 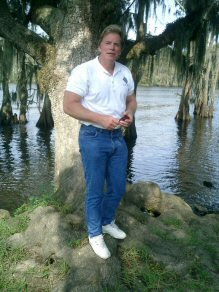 Are you trying to tell me this guy is an All-American heterosexual Christian whose only raison d'etre is ensuring the rights and fair treatment of "European Americans"?
Please.
If I know anything, I know when I see a closeted gay man who loves big Black cock so much he feels guilty about it and behaves like such a contrary jackass as a result.
The lady doth protest too much, methinks.
It must be killing the radical right racists in America to see the rest of us rejoicing in Obama's landslide election.
They don't see his intellect, his calm, measured demeanor, his superb education or even his exemplary role as a husband and father. They see a nigger, set out to ruin America.
As someone old enough to have lived through the assassinations of JFK, RFK and MLK, I worry a lot about violent, evil racists like David Duke stirring up his ilk and prompting them toward violence, against all people of color and especially toward President Obama.
If Bush accomplished anything, he did manage to create an environment of uber-security for the president. No open motorcades, no large public venues without careful scrutiny of all attendees, no public jogging or other activities where a nut with a gun would be tempted to pick him off.

President Obama is beloved. He's wildly popular with sane people. The rest of the world even shares our joy.

There are Americans out there with more guns than brains. They value their anger and racism more than the God they claim to worship. In fact, sales of automatic weapons and ammunition have dramatically increased since the election results were called.
Let's just hope that President Obama takes a cue from paranoids like Bush & Cheney and keeps himself and his family surrounded with more security than he thinks they'll ever need.
No matter how crazy and violent he might think the radical right is, multiply that by a thousand and I think it'd present a more accurate estimate.

We are excited to finally have an inspirational president again. We as Americans have to do all we can to make racists like Duke so utterly unpopular and rebuked, it'll give all racists pause.
It's no longer a time to endure the racists among us with silence and civility. They have to be called on it and we have to be as bold as they are rude and ignorant.
Do you agree?
Posted by Karen Zipdrive at 6:38 PM

Email ThisBlogThis!Share to TwitterShare to FacebookShare to Pinterest
Labels: Our New President

Too funny about David Duke. And correct, what DID bush do his first year, other than show that he was almost illiterate? President Obama has 100% support from me.

Bush was very busy pushing away all sorts of advice from the Clinton Administration about the danger that Osama Bin Laden posed to our country.

Obama is totally uninterested in revenge. He meant all that stuff about pulling people together.

It's so weird. I wish that I could be more like him and not lose it when I read all this dictatorship crap that the Right is tossing around.

Can't we just kill all the repugs with the guns Obama is going to take from the NRA crowd?

Who the hell even has Himmler, Jr. on the air? Why not just interview Crazy Johnny who lives in a cardboard box near the junkyard.

I hear house whip Eric somebody blathering on about keeping Obama from going too far left.
Yea right-- now that his party is in the minority, he can eat leftist dust.

I don't want to play partisan game stuff, be our country had tipped so far to the right, it had gone off the deep end.

Things have to get radically changed to get anywhere near balanced.

If those yammerers want a project to work on, how about fixing the soon to be $11 trillion dollar debt their party created???

the sore losers are already making waves -- rush, the fat fuck - is calling this the obama recession.

fran,
the eric you speak of is eric cantor. he's the only rethug jew in the entire house of representatives. that he aligns himself with a party that respects jews as little as they respect blacks tells you volumes about him.

Is DD wearing BLUSH?? OMG, he so does want a black cock. How painfully obvious.

I agree, the Obama's better overestimate their protection and security needs. There are paranoid freaks out there who honestly think (thanks to McLame/Failin') that he's a terrorist who took over their country. They are stupid, crazy and afraid of their own shadow.

The only good thing about their paranoia is that it massively lessens the odds that they'd venture out of their comfort zone with a weapon. They are mostly xenophobes who enjoy hating from afar.

Absolutely - let's hope the security is foolproof. There are all kinds of racists coming out of the woodwork - even on Long Island there have been hate crimes and in New Jersey, crosses burned! Unbelievable.

I do agree with you, Karen. I am so fucking sick of the center right, govern from the center bullshit from the asshats on television.

Bush's first year? Tax cuts for the wealthy and a couple of hundred dollars for the middle class, No Child Left Behind (a suck-ass law, if ever there was one), getting his way about invading Iraq....wow - Obama could go a long way by simply rolling back those Bush "accomplishments."