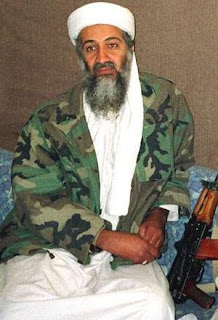 Oh, Allah has failed me (may we bow to his supremacy with great humility and disguise disappointment with long beard)!
The Saudi Royal Bandarbush had called my cellular telephone and assured me that infidel JohnMcCainbush was definite to win president US and therefore the Georgebush order of my protection would be continue.
Now this horrible Barack Hussein Obama president the fake Muslim (may Allah be blessed with 10,000 underage virgins for striking him with testes heavy like bull camel) might likely send in actual evil infidel US Army soldiers to find me at Pakistani Hilton and kill me until I no longer live to serve Allah (may He be blessed with 1,000 feather mattresses for sacred tent).
Silly US people think evil Muslim imposter Obama as "liberal" but I think he pretend to be liberal and kindly but really those types will take up sharpened s'aif sword and plunge into my heart with mona lisa woman smile on placid man face.
And he is shrewed he would take TV infidel who lay with women Rachel Maddow to make video pictures of my murder and show it on the TV cable in infidel american cable TV primetime.
Allah please (may you detect my panic by noticing my soiled robes) help me!
Imagine feather in fez Obama would get by showing up in the Congress US with my severed head on a stick!
Even the red state rightwings with the cow skull on belt buckles and pick it trucks with big tires would proclaim with glee my demise!
Please mighty Allah (may you be blessed with Humvee fleet dipped in gold)call upon georgebush to sue the US supreme court to make the votes cast for the evil infidel Hussein Obama not count and to make himself president again so I may be safe.
ALLAH AKBAR!
Posted by Karen Zipdrive at 12:41 AM

Now, that is funny!
Keep up the good work.

how do you keep coming up with this??

How do you keep getting these people's diaries, man!?? You're amazing!

I hope that fucker's shaking in his turban right now.

Recall our telling the Taliban to cough him up or we're coming in ? I guess O can give the new Paki a similar ultimatum now that he's cooled his sarah palin woodie and if he can't deliver we can just simplify that whole lawless tribal region thing in waziristan with the same thing we gave the talibs. bush totally didn't want him caught or killed that's for sure. Don't u love too the way the righties want to call him a muslim on one webbed hand then tie him to Reverend Jeremiah Wright with the other ? which is it hannity you flatheaded palin sniffer ? this diary is fucking wacked and you are becoming one of my favorite loose wires on my internets ! Peace, Hope and the O-man, still grinning 14 hrs later.