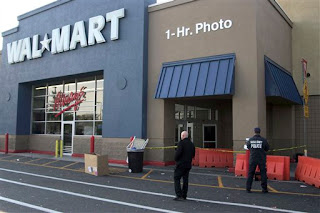 You've all heard by now that a Walmart employee in Long Island, NY was stomped to death by anxious shoppers trying to barge their way into the store when it opened at 6 a.m.
Looks to me like the Walmart people were too cheap to hire extra staff and security to manage the stampede.
I hate all Walmarts, especially the one near my urban house.
Now, I have nothing against illegal aliens or Mexican Americans, in fact I am half Mexican American myself. However, shopping in the country of Mexico is a little too frantic for me. All the jostling, the screaming toddlers, the loud voices and the lack of basic civility offend my basic sense of public behavior.
The Walmart by my house is exactly like a little trip to Laredo, Mexico. The noise level alone makes me want to pop Valium like Skittles.
I can only imagine what Black Friday was like yesterday at that store. With about four employees for every 4,000 shoppers, I imagine getting hold of one of those $800 Samsung 52" plasma TV's they had on sale was a lot like the running of the bulls in Pamplona.
No no, no.
Walmart sells cheap Chinese imports and undervalues its employees. The money saved by shopping there is made off the backs of poor people.
Sure, it's a great place for people of limited means to shop, but anyone above the poverty line should leave the place to those who need it most.
The Long Island police currently are studying store video to try to identify the perpetrators who stomped that man to death. Good luck on that peculiar game of Where's Waldo.
As far as I'm concerned, I'm not even going to drive past my local Walmart until after the holidays are over.
Posted by Karen Zipdrive at 1:44 PM

Email ThisBlogThis!Share to TwitterShare to FacebookShare to Pinterest
Labels: Another Reason to Skip Walmart

All the lily white, redneck trailer trash types at my Wally World aren't any better. The noise factor has my ears ringing for hours afterward.

And the employees suck ass. You have to tackle one to get them to stop and answer a question. Fuckers.

Wow, this story is so disturbing. As if I needed another reason to stay out of WalMart.

i hate walmart, but the fault is the entire mindset at this time of year, not just one store. they advertise supersales, and everyone knows that the quantity will never match the demand. they set the scene for confrontation. it is a national joke that people will be fighting over a piece of merchandise. the news plays it up. tv sitcoms make it a humorous situation instead of a dangerous one.
just the thought of 2,000 stampeding customers trampling a man to death is sickening. is a good deal on a tv set or a sweater worth the life of a young man?
there are so many guilty parties to this crime. the district attorney and the cops can watch the surveillance tape a million times, but they won't see a helluva lot of the aiders and abettors. will they be locking up all the retailers' ceos and the advertising execs who push the type of ad campaigns that have consumers frothing at the mouth on black friday? i don't think so.

I doubt that the Walmart executives are concerned much about the stampede beyond what it might cost them in lawsuits.
To them, employees are expendable.

Karen...what's more disturbing about this story is the report that a Wal-Mart employee came out before the official store opening to rile the crowd by telling them they would be opening a half-hour earlier than announced. Another disturbing aspect of this story are those shoppers who got pissed off when the cops asked them to leave the store after the employee got trampled. Wonders never cease here on Long Island.

fuck walmart - thankfully there are NONE in NYC limits

This is disgusting. And I have NEVER set foot in a WalMart and never will. I also dropped out of xmas shopping years ago. If I get anything, it's lil' useful stuff at the 99 cent store.

I was so appalled when i read this yesterday. And then there was a shooting where 2 guys died (killed each other) in a Toys R Us out here in Palm Desert. and to top it off, I saw a video on someone's blog of shoppers fighting over a pile of Wiis or some shit.

People are fucking greedy and stupid.

What would Jeebus buy?

So huge, so hopeless to conceive...

This may be a more common occurrence than we realize. About 30 years ago I went to a simple ski sale in L.A. Unfortunately I was near the front of the line and when the doors opened I was shoved up against and almost pushed through a plate glass display window. The greedy mob was oblivious to my screams and I probably would have suffered some injuries if my husband hadn't been strong enough to lift me up almost over his head to save me.

The best plan is to avoid mobs (rich or poor) that are hell bent on saving money on needless crap.